Bryant & May and the Burning Man: A Peculiar Crimes Unit Mystery 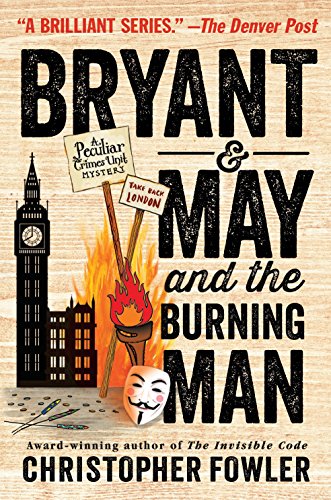 “Riots everywhere . . . Hurled fire, catapulted bricks, shattering glass and the blast of water hoses . . . once more, as had happened so many times in the past, the City of London found itself on fire.”

The cause of the current problem is Dexter Cornell, an investment banker whose dealings have bankrupted Findersbury Private Bank of Crutched Friars—but only the investors. His board of directors got word of his dealings and saved themselves, and now Cornell has taken refuge in his country home while the aftermath of the discovery rocks London into overt panic and moral anger.

“It was, everyone agreed, a right bloody mess.”

Very bloody indeed, for disguising himself in the uproar is a killer with a warped purpose. Wearing a mask representing the graphic novel character from V Is for Vengeance, he’s killed once, a particularly horrible death of a homeless man sleeping in a doorway. He may not really want to kill but in this particular time and place, he feels there is no other way to bring about the effect he needs.

“With tears in his eyes and the fire of righteous anger engorging his heart, he set to work once more.”

The Peculiar Crimes Unit takes up the case, and its two most senior detectives are on the job.  While Arthur Bryant forms his own outlandish theories—digressing as usual into seeming nonsense only to emerge with the right answers—John May sticks more to accepted methods of inquiry. Both arrived at the same conclusion, however:

“‘the person you’re searching for is the very essence of rebellion, conducting an ideological war in microcosm. At the very least, you could be looking at four more murders.’” Complicating their investigations is their superior, determined to throw obstacles into their paths and close down the unit.

“‘Let me tell you what is going to happen.’ Link’s speech had the ominous clarity of a warning. ‘You’re going to close up the investigation immediately. You will make your final report and e-mail it to me before you leave tonight . . . This is the end of your involvement in the case . . . Do I make myself quite clear?’”

Bryant and May are determined not to let this happen, but Bryant’s now having problems that may help bring about the department’s doom.

“he failed to recognize where he was . . . The awful sense of panic grew. . . none of the shops or any of the street furniture looked familiar . . .  He took a step to the left, then another, and found himself on an alien corner, quite unable to cross the street. Frozen to the sport, he realized to his horror there were tears rolling down his cheeks.”

The departmental physician has a definite but devastating diagnosis that no one, especially not Bryant’s old friend, May, wants to hear;

“‘It seems I’m developing an unusual form of Alzheimer’s, not one he’s seen before . . . ministrokes . . . irreversible and developing fast . . . I enter into fugue states and can’t remember anything afterward.’”

‘I want to go on, of course. That’s what anyone with more than two brains cells wants to do, isn’t it?’”

Determining to stay nearby so he can guide his old friend through his patches of confusion, catch the killer, and then face what may come, May abruptly loses Bryant in the chaos of the riots and the upcoming Guy Fawkes Night, when the people of London celebrate the foiling of the Gunpowder Plot of 1605 by burning the conspirators in effigy.

“‘and the Guy Fawkes Night event is the only one that burns giant statues of unpopular public figures. Tonight it’s burning the hated financial fraud Dexter Cornell in effigy . . .’”

The police are notified that Cornell himself has been abducted, possibly to take his straw figure’s place in the bonfire.

. . . and Dexter Cornell’s nine-year-old son may hold part of the answer.

With references to V Is for Vengeance, the Internet, and The Wicker Man, Bryan and May and the Burning Man is up-to-date in its setting and procedures, and definitely entertaining in its narrative. Delivered in a tongue-in-cheek manner with many clever turns of phrase, this story contrasts the detectives’ search for the killer with the devastating event in their personal lives. While a serial killer threatens the beleaguered city, two old friends fight a new but very intimate foe, balancing the importance of each to the citizens of London as well as their personal lives.