The Bruising of Qilwa 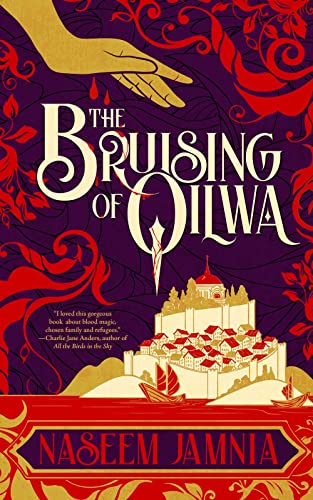 “It would not be surprising in the least, and very much welcome, if The Bruising of Qilwa were to eventually grow into a full-length novel.”

The recent resurgence of the novella has left many authors struggling to gauge how much material will fit in the space provided. Too little, and a novella feels like a short story or novelette stretched past the length its substance can bear. Too much, and it feels like a novel packed into a too-small sack. The latter is perhaps the better mistake to make—or at least the more interesting one—and this is the side on which The Bruising of Qilwa falls.

Its protagonist, the non-binary Sassanian healer Firuz, is struggling with many problems. Closest to home, their brother Parviz desperately wants alignment treatment, the in-setting term for the combination of magical and surgical procedures that can reshape a body to affirm the individual’s gender. Unfortunately for Parviz, Firuz fears their own skill with blood magic is not enough to perform that process safely. Firuz has also taken in an orphaned girl with a powerful talent for blood magic . . . and far too little patience or sense of caution for how she deploys it.

Furthermore, the clinic where Firuz works is coming under fire from the Qilwan governor, whose regulations threaten the clinic’s ability to provide care to other Sassanian refugees like Firuz and their family. Its closure would be especially dire because a mysterious illness, which Firuz terms “blood-bruising,” is cropping up among their patients—and they fear it may be the work of an unskilled blood magic practitioner.

Complicating all of these matters is the deeper history of the setting, involving the ancient Sassanian empire, its fall and subjugation, the initial use and then later rediscovery of blood magic (which is not inherently sinister, but which draws its power from the body of the practitioner and/or their target), and the prejudice among both Dilmuni and Qilwans against anyone with that skill. Sassanian refugees are flooding Qilwa because something in their previous homeland of Dilmun is hunting and killing them, while a monstrous bird haunts the skies.

These plotlines and conflicts would be more than sufficient to power a novel; here, they feel packed in too tightly to breathe. Despite knowing and sympathizing with their brother’s desire to have the body that feels natural to him, Firuz largely avoids discussing their own inability to safely provide that body, instead hiding in their work. The recklessness of their protégé Afsoneh is mostly left to flower on its own, Firuz being reluctant to scare her with dire stories of what could happen, despite them knowing the true depth of that risk.

Most frustrating is Firuz’s lack of investigation into the blood-bruising. Despite fearing that it has its origins in Sassanian blood magic, and despite knowing that Qilwa is already on edge about the prospect of Sassanian refugees bringing disease, they take no particular action to determine whether the disease is contagious, whether anything links the victims, or any other question that might help them stop its spread.

Granted, Firuz is extremely busy, attempting to help their mentor Kofi keep the clinic afloat and treating the growing number of poor residents with nowhere else to go. In context, however, it feels a bit too much like there simply isn’t room for them to investigate: No sooner is the novella done setting up its pieces than it’s time for the final confrontation. Key aspects of blood magic and even Firuz’s apparent claustrophobia (which is mustered to answer the question of why they didn’t investigate a particular detail) get dropped in quite late, and feel too convenient as a result.

This cramped feeling is a pity because the material here is so rich. Sassanid, Dilmun, and Qilwa draw on the history and culture of Persia and its neighbors, with stand-ins for both Islam and the Zoroastrian faith. To this Jamnia adds their own worldbuilding around gender, not only with the alignment procedures, but with an integrated approach for how people in a society where variations are taken for granted can make it clear what pronouns should be used for them, without it being the stiff modern assertion of “my pronouns are.”

In their acknowledgments, Jamnia mentions that this tale began as a short story, “Nothing Less Than Bones,” published in Aurelia Leo. It would not be surprising in the least, and very much welcome, if The Bruising of Qilwa were to eventually grow into a full-length novel, where all its components would have the space they deserve.