From Bruges with Love (The Pieter Van In Mysteries) 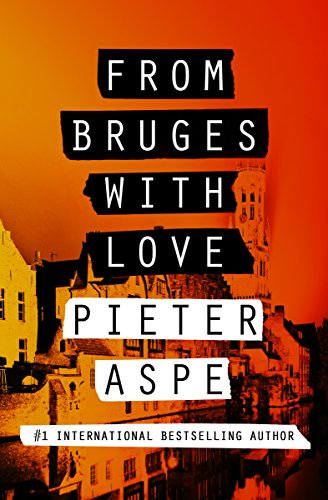 “the Flemish setting and the unexpected plot twists make this an enjoyable read.”

Best-selling author Pieter Aspe continues his saga of Flemish detective Pieter Van In with the publication of the third book in the series, From Bruges with Love. Suffering through a strict diet of fruit, vegetables, and fish to please his pregnant wife, deputy public prosecutor Hennelore Martens, Pieter is less than happy. “The last three months had been hell: cornflakes, fish, vegetables, fruit, water, and every now and then a glass of wine.”

Even the sight of the skeleton that Hugo Vermast’s little daughter dug up in the backyard of the partially renovated farmhouse doesn’t spoil Van In’s appetite. “At that moment he would have sold his soul for a burger and fries.” The pit was at least four feet deep, but the skull was visible in the sand. These were clearly not sheep bones, and one’s family usually doesn’t bury their loved ones in the backyard, so Van In and his sidekick, Sergeant Guido Versavel, are looking at a probable homicide.

According to Alexander De Jaegher, the less than competent police physician, the skeleton is male, had broken his jaw during his life, had very expensive dental work, died of a broken neck, and has been dead about ten years. A secret examination of X-rays and the autopsy report by a retired and very competent doctor reveals that what the skeleton had received extensive cosmetic surgery, and his jaw had been deliberately split during the procedure.

A search of missing persons’ reports, and calls to hospitals, surgeons, and dentists turn up nothing. The skeleton, named Herbert by Van In and Guido, remains a mystery man. No one knows who he is and no one seems to care.

Van In is wrong about no one caring about Herbert. Several members of Bruges high society care very much that the skeleton has fallen out of the closet, so to speak. William Aerts reads of Herbert’s appearance while sitting in his kitchen. “After so many years of relative calm, the acid in his belly now started to hammer hard.” His wife, Linda, once the belle of Bruges night life and now a very plump, unattractive drunk, knows something is bothering her husband, but not what.

Benedict Vervoort, a rather sleazy real estate agent who handled to sale of the property which is Herbert’s grave site, sits on the board of Helping Our Own, a local charity which was the previous owner of the property. Van In is not impressed by the man: “. . . he’d rather see Mother Teresa strip for Playboy than Vervoort giving twenty francs to a beggar on the street.”

Vervoort reveals that the property with the derelict farmhouse and Herbert’s grave was donated to the charity by the original owner, Lodewijk Vandaele, another very wealthy and sleazy member of Bruges society. Van In is curious about the transaction. “Why the generous do-gooder. That’s what I want to know.”

Van In’s investigation uncovers William Aerts’s name, but according to his wife, Linda, Aerts has done a runner after cleaning out the marital bank accounts. Van In is certain Linda knows more than she is telling him and arrests her. His interrogation methods are highly illegal, but elicits a list of names of prominent men involved in Bruges’s prostitution trade.

After her release, Linda hires attorney Yves Provoost, and files charges against Van In, and the detective knows he is on the edge of losing his job. When a young policewoman that Van In assigns to go undercover to investigate Helping Our Own charity disappears, he knows that while he may lose his job, his young rookie cop may lose her life.

A very competent police procedural, peopled by eccentric characters, presents a vivid picture of a very ugly side of the flesh trade as operated by men with no scruples, no morals, and no empathy. Mr. Aspe does not write in shades of gray. His good guys—Van In, Guido, Hannelore Martens—are mostly good, although Van In does stretch the rules on occasion. On the other side, Mr. Aspe’s bad guys—Aerts, Vervoort, Provoost, and particularly Vandaele—are bad to the bone. The reader will not be confused as to who is good and who is evil.

The rapid switches between scenes featuring the various characters does make the narrative a little jerky, and the similarity of last names of many of the characters will require American readers to pay close attention in order to avoid confusing one character with another; however, the Flemish setting and the unexpected plot twists make this an enjoyable read for mystery fans.