Bruce Springsteen: The Stories Behind the Songs 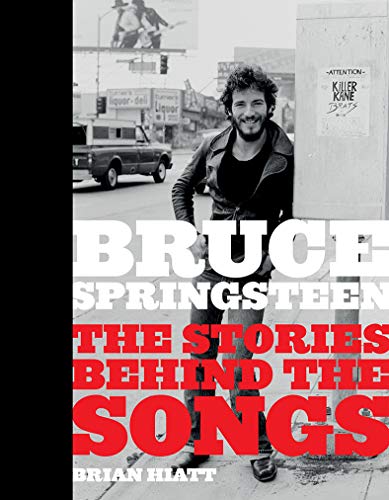 Bruce Springsteen fans are like no other fans in the annals of rock ’n’ roll, though it would not be easy to describe them. They come in many shapes and sizes, and belong to different generations. Still, what they have in common with one another and with Springsteen, aka The Boss, is raw energy, pumped up energy that can sustain itself hour after hour, seemingly without tiring.

If the Boss performs until 2:00 A.M. his fans are with him every minute of the way. They know the lyrics to “The Rising,” “Dancing in the Dark,” and “Hungry Heart”—all of which receive ample attention in this new handsome book.

Springsteen fans also share a kind of American-ness that belongs to Dust Bowl refugees from the Depression, Vietnam veterans, and lovers of roots music, whether it’s folk, gospel, or rhythm and blues.

You don’t have to be a U.S. citizen to have American-ness in your DNA.

You can be from Rio in Brazil, Prague in the Czech Republic, Berlin in Germany or Sydney, Australia—all place where Springsteen has performed—and still enjoy the bigness, the beauty, the promise, and the sadness of America that’s reflected in his lyrical, soulful songs and his unforgettable live performances.

Brian Hiatt’s Bruce Springsteen: The Stories Behind the Songs does what it sets out to do and much more. It uncovers the history beneath the lyrics and the tunes, and offers a portrait of the singer/ songwriter in words and in images.

A longtime editor at Rolling Stone and a native of New Jersey, like the Boss himself, Hiatt knows the territory, the background, and foreground, too.

There are more than two hundred photos in this compendium of Springsteen songs, some of them big hits like “Born to Run,” which became a national and even an international anthem for a couple of generations that doesn’t like walls, bullies, or lies.

There are also little-known songs in these pages, such as “The Fever” and “Happy,” though they aren’t little known to fans who have all the albums and who trek to performances no matter how close or how far from home.

They’re all welcome in Hiatt’s big book, whether they signed up for Springsteen when he started out in the 1960s, joined the crowd in the 1990s, when Springsteen was a global icon, or became enthralled more recently when he has spoken out about political causes and politicians, and hasn’t let anyone co-op him, though many have tried, including Ronald Reagan.

The photographs, which are in color and in black and white, document Springsteen’s life and depict him in all his many guises. Indeed, he has looked like a teenage tough, a workingman, a hunk, a biker, a mobster, and an all-American guy.

He has even looked like Frank Sinatra, another New Jersey success story.

In the photos in this book, Springsteen’s guitar—which seems to an extension of his body—is a tool, a weapon, a sex symbol, emblematic of the creative expression of the human spirit.

Bruce Springsteen is a reminder that when the singer/songwriter first came along, seemingly out of nowhere, and attracted attention, rock ’n’ roll seemed to be moribund if not dead.

It’s no wonder that in 1974, Jon Landau wrote, after attending a performance at the Harvard Square Theater, "I saw rock and roll future, and its name is Bruce Springsteen. And on a night when I needed to feel young, he made me feel like I was hearing music for the very first time.”

Nearly a whole generation, coming of age with Fats Domino, Chuck Berry, Elvis, the Beatles and the Stones, shared Landau’s sentiments. And it’s not surprising, either, that Landau went on to become the Boss’s manager and producer.

With the help of Landau and a crew of extremely talented musicians, Springsteen brought rock back to life by going to its roots in folk and in rhythm and blues.

Hiatt tells that story in an understated way, without bravado and without clichés. He shines a bright light on Bruce, and on the members of his band, including Clarence Clemons, Roy Bitten, Danny Federici, Patti Scialfa, and Steve Van Zandt—the names themselves tell an American story—who have reminded audiences that they, too, are born to run.