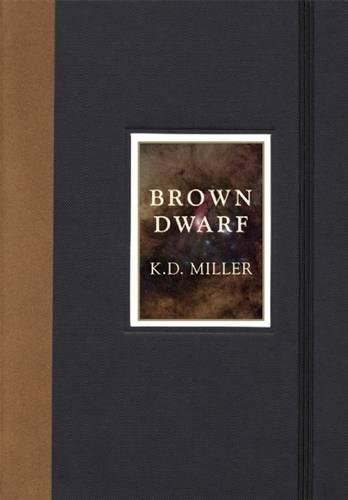 Think back to your childhood friendships. Did you ever do or say anything that resulted in the death of a childhood friend? In K. D. Miller ‘s novella Brown Dwarf, just such a sense of culpability has haunted Toronto mystery writer and Hamilton, Ontario, native Rae Brand, neé Brenda Bray, ever since the death of her friend Jori Clement when they were twelve in 1962. The narration alternates between chapters entitled “Brenda” that are told in the third person about the twelve year old girl, and others entitled “Rae” that are addressed to Jori by the adult woman Brenda becomes.

Both girls are bookish, only children. Brenda’s mother Annie, a bigoted depressive prone to violent mood swings, is the widow of a bus driver who died when Brenda was eighteen months old. During her mother’s bouts of madness that Brenda calls “hurricanes,” Annie berates Brenda for being fat, but during her calmer days Annie pushes high caloric food in front of her daughter. Before Jori transferred from an elite private school to Brenda’s public school at the start of seventh grade, neither mother nor daughter had any friends. Even Annie’s mother, Thelma, will initially have nothing to do with her daughter and granddaughter because Annie was pregnant with Brenda just before she married her husband, Art.

Jori’s parents, an avuncular university professor and a brittle medicated faculty wife, are open-minded inquisitive liberals who treat their daughter almost as a peer. Jori mistakes Brenda’s social isolation at school for elitism and befriends her assuming she is a like-minded snob. One visit to the Clement home makes Brenda realize her mother’s lack of taste. Just as Brenda dominates and manipulates her parents, Jori is also the dominant partner in her friendship with Brenda.

Brenda is grateful for Jori’s friendship but resents her pretentiousness and is not entirely comfortable with their sexual experimentation; Jori is clueless to Brenda’s ambivalence. Jori may be precocious, but Brenda finds her obsession and infatuation with escaped child molester/murderer Clarence Frayne weird and disturbing. Brenda initially plays along with Jori’s scheme to capture Frayne in the cliffs and crevices of the Niagara Escarpment traversing their city of Hamilton, but comes to realize that Jori’s grasp of reality is no better than her mother’s.

The title of the story comes from astronomy, in which a brown dwarf is a celestial body much larger than a planet that lacks the requisite combustion to become a star. In detective fiction a brown dwarf is a dull, unassuming character whom no one suspects to be the criminal. Brenda sees her mother as the social equivalent of the astronomical brown dwarf, and fears she herself fits the fictional definition.

It took this reader fifty or so pages to get into this 143-page book. At first the intended target audience is unclear: Is it adult or juvenile fiction? And the fact that the story was about 12-year-old girls would normally be less than interesting to an adult male. But the reader with these doubts is in for a pleasant surprise. Brenda turns out to be a psychologically more complex character than the unhappy fat girl we meet in the novella’s opening chapters. This reviewer recommends Brown Dwarf to all readers, especially parents of tweens.