The Brotherhood of the Wheel 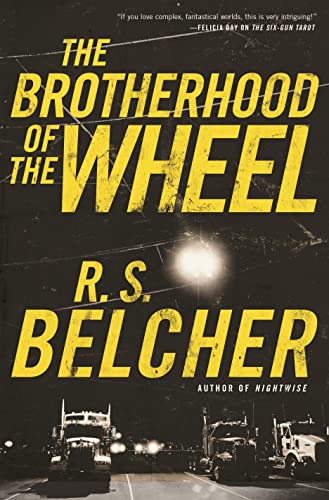 Jimmie Aussapile, whose CB handle is Paladin, drives the highways of the American South seeking justice and safety for those who share the road. Jimmie belongs to the Brotherhood of the Wheel, a legacy of a branch of Knights Templar that went underground in the 1100s, with other truckers and road warriors.

Author R. S. Belcher knows how to describe a setting with poetic metaphors and will engage a reader’s senses in his densely packed paragraphs. Characters are detailed—from their clothing to their facial expressions—where most authors would have settled for a vague description and left the rest to the imagination, which allows readers to really connect with the protagonists and root them on in this urban fantasy.

Belcher references modern pop culture such as the Adult Swim cartoons “Squidbillies” in the opening scene, and for those in the know, the references will bring a smile to the reader’s face, or it will run their blood cold with terror at the mention of creepy urban legends.

While Jimmie is on the road, he meets the ghost of a young girl who talks about a strange creature that hunts souls. Karen, the sad ghost, asks Jimmie to tell her parents the news of her death and that she’s okay now—this is the first stop of Jimmie’s mission. Karen isn’t the only teen to have gone missing, and Jimmie joins forces with Louisiana State Police Officer, Lovina Marcou, to investigate.

The road Jimmie is on is laden with folklore and mythology. Jimmie discovers a place called Four Houses somewhere not on any map where Cernunnos, the Celtic horned god, has been receiving sacrifices and what has been unleashed is a great and dark power. The Black-Eyed Children, part of American lore, are supposed paranormal creatures who shapeshift into children and hitchhike or beg door to door, waiting for someone to let them in, and once they are welcomed over the threshold, they murder.

Belcher has taken the urban legend of the Black-Eyed Children and made them into shadow people, packs of children who are used as weapons for an all-too-real human. Unfortunately, Belcher has also butchered the Celtic god Cernunnos and turned him into a demon-like evil (Cernunnos is the Horned God reflecting the yearly seasons and the cycle of life). Wiccans and Pagans may take offense at this mangled depiction of the god who has been described by scholars as peaceful. Pagans will also be affronted by the use of their tradition’s religious namesake as the name for a cruel and murdering entity known as The Master of the Hunt.

The chapters often shift point of view, even in the middle, so readers get the omniscient narrative treatment, which can be frustrating—right when a reader settles into the viewpoint of one character and is eagerly awaiting the next step, the scene changes and readers are somewhere else.

Readers won’t be able to put this novel down; it is an urban thriller with fantastic characters and a healthy dose of mythology and urban legends. Readers who enjoy conspiracy theories may want to pick up this title to see what could have become of the Knights Templar in the modern world. Fans of horror fiction may want to also give The Brotherhood of the Wheel a try for its suspense and terror. Readers won’t want to read this at home alone in the dark.