A Brotherhood Betrayed: The Man Behind the Rise and Fall of Murder, Inc. 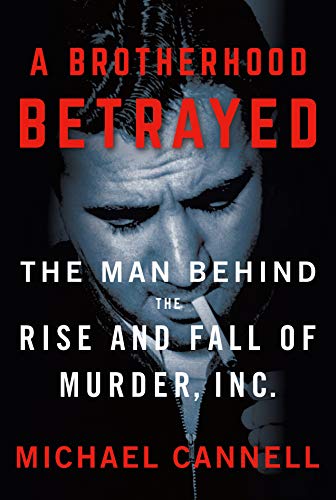 “Cannell’s telling of this story is page turning. His research is unquestionable, his descriptions chilling, and his character development is absolutely visual.”

Lucky Luciano, Al Capone, Bugsy Siegel, and a multitude of other criminal names are often recognized before the names are even spoken. But what about Abe “Kid Twist” Reles? What is known about him? Unless you follow the many tales of organized crime, probably nothing. And yet Reles was the man responsible for organizing and running Murder, Inc., the most ruthless activity in American crime history.

In A Brotherhood Betrayed author Michael Cannell introduces the reader to Reles in minute detail, starting with his minor league crimes in Brooklyn until he rises to “assassin-in-chief for an underworld death squad loosely known as Murder, Inc.”

But the story doesn’t stop with Reles’ rising to the top. Cannell’s extensive research brings to light how Reles became a “rat” and turned on his friends, his acquaintances, and his bosses by turning states’ evidence.

But the story starts with Cannell describing the details of how Reles began his life of crime in the Brownsville section of Brooklyn at the young age of 15. The neighborhood was considered by many to be “the toughest neighborhood in America.” And it was run by Abe Reles and his small gang of friends who lived to intimidate.

Nicknames in organized crime were popular and it did not take long for Reles to adopt the name “Kid Twist,” a name he took from Max “Kid Twist” Zweiback, a prominent Jewish gangster. The name stuck.

It did not take long for Reles to come to the attention of two of the biggest names in crime—Lepke Buchalter, considered by many as the most prominent Jewish gangster in New York, and Lucky Luciano, equal in reputation in the Italian gangster ranks. Buchalter and Luciano with several other high-ranking mobsters formed a commission designed to remove the chaos that existed on the streets and bring order (and thus more profitability) to organized crime.

They needed to ensure that a hierarchy was put in place and to do this they had to control the unruly. Thus was born Murder, Inc.

But what exactly was Murder, Inc.? “When the principals of a coast-to-coast organized crime network identified an informant in their ranks, or a foot soldier who breached their loyalty code, they passed a murder contract down to Reles, who either took up his weapon—gun, garrote, ice pick—or more often, delegated the job to lieutenants.” The men at the top never got their hands dirty, and yet they maintained a strong control over their ranks with the adept help of Abe Reles.

As Murder, Inc. grew, so did Reles’s standing in the world of New York crime. Murders became an everyday occurrence, while bribery existed through the ranks of police, the justice system, and politicians at all levels, ensuring no convictions. New York was out of control. Bodies were strewn from one end of New York to the other, and in some cases, bodies just disappeared.

Enter Thomas Dewey. Assigned by Governor Herbert Lehman as special prosecutor to take on the mob. it soon became obvious that any action had to come from inside the mob, not outside, and that is where Dewey focused his attention—turning rats! Dewey “was groomed . . . to demand restoration of decency and order.” And that was his focus.

He handpicked 20 assistant district attorneys to help him achieve his goal of bringing law and order back to New York. Gangsters began fleeing into hiding. Soon that focus turned to Buchalter who also went into hiding. The only person he allowed near him was Reles. Buchalter remained in hiding from 1937 until 1939.

As Dewey’s grasp on crime in Brooklyn began to have the desired effect, he also saw his political opportunities rise. It was time for a change, and William O’Dwyer came into the picture. Dewey and O’Dwyer were total opposites in personality, but their goals were the same, to continue to rid New York of crime.

Reles’ grip on the underworld continued to tighten until O’Dwyer encountered Harry Rudolph, who ratted on Reles. The “assassin-in-chief” may not have been book smart, but he was smart enough to recognize the law was closing in, and his best way out was to offer his knowledge of the syndicate and its operations.

O’Dwyer wanted the bigger fish, and he made a deal with the devil—protection for information. And thus, Reles began to share information at all levels. “He also solved murders the authorities had no knowledge of.” The courts began to fill up with trials in which gangsters at the top ranks began to feel the heat—even Reles’ best friend, Lepke Buchalter.

To say that Reles soon had a target on his back would be an understatement. The commission raised $100,000 for anyone who could murder Reles. That did not stop the flow of information, and trials and guilty verdicts continued to fall on the New York organized crime leaders.

Of course, what would a crime story be without a big splash at the end, and that came when one morning Reles’ body was discovered on the roof of a building five stories below his hotel room. The verdict there was suicide while trying to escape, but almost 80 years later, the question may still not be answered to everyone’s satisfaction. Rumors continue to abound that he was killed by the police, by O’Dwyer, by the commission. It seems that everyone has a theory, but the official declaration still stands: death by suicide.

Cannell winds up his story with what happened to many of the characters, and he closes the loop well.

Cannell’s telling of this story is page turning. His research is unquestionable, his descriptions chilling, and his character development is absolutely visual.

It’s hard to find anything endearing in a story about such heartless acts of murder, but if there is anything engaging about this book, it is the names of the characters: “Tick Tock Tannenbaum,” “Bugsy” Seigel, “Puggy” Feinstein, Harry “Big Greenie” Greenberg, “Pretty” Levine, “Philadelphia” Phil Strauss, and Simon “Fatty” Walker are just a few of the names these gangsters were given. It almost becomes a game identifying gangsters by their nicknames.

This book is a fast read and informative.