Brooklyn: A Personal Memoir: With the lost photographs of David Attie 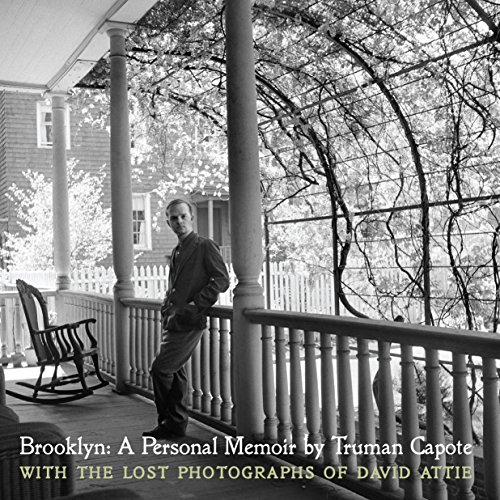 Brooklyn: A Personal Memoir by Truman Capote is a book you can risk judging by its cover art: a black and white photograph of a lithe Truman circa 1958 leaning on the sleepy back porch railing under wisteria hanging off vines framing his penetrating gaze. The arresting image is just the first of dozens of entrancing photographs by David Attie, an illustrator and commercial photographer.   Capote’s text and Attie’s photos evoke the heady days of a pivotal era in New York’s melting pot: a mosaic of sights, sounds, cityscapes, neighborhoods, and characters. Fertile ground for both Capote and for Attie.

The memoir comprises 25 pages of the book. It was first an assignment from Holiday magazine in the 50s, assigned to him by John Knowles, author of A Separate Peace, who wanted him to write about what it was like to live in Brooklyn.

Capote describes his residence on Willow Street: “French doors led to a spacious rear porch reminiscent of Louisiana.” And his building’s hall with a “staircase floating upward in white, swan-simple curves to a skylight of sunny amber-gold glass. The floor were fine, the real thing, hard lustrous timber.” The yellow house on a hill, owed by a friend of Truman’s, overlooked the Esplanade and the New York Harbor and in the distance, the Manhattan skyline.

”Mystified friends, suspecting provincial stagnation, and inquired: “But what do you do over there?” “Let me tell you, life can be pretty exciting around here.”  Capote writes.

There was no risk of writer stagnation for Capote in this environment. He was in top form and was preparing to publish Breakfast at Tiffany’s in Harper’s Bazaar, which was to be accompanied by some of the photos Attie had taken of Capote and Brooklyn. But the magazine, a starchy Hearst publication, backed out because the novella’s main character Holly Golightly was essentially a story about a prostitute. Esquire magazine immediately picked it up for publication but didn’t use Attie’s photographs.

Attie was changing careers from being a commercial illustrator to photography, but wrongly believed that he wasn’t in the same league as more successful contemporaries. He was obviously underrating himself. He was a fine commercial and art photographer, with a stylistic edge of a photojournalist.

The atmosphere, textures and point of view of his studies of Brooklyn are enchanting, editorial, and specific to his aesthetic. The range of textures is so dimensional for black and white photographs, for instance, essentially artistic studies of stillness and movement. Attie had an indelible eye for street scenes, cityscapes, and the architecture of Brooklyn, many with the Manhattan skyline looming in the distant mist. His photos of the families and their day to day life document this era in Brooklyn in uniquely visceral ways.

Attie was a successful commercial photographer and had gallery shows and prints from his photographs taken in the Soviet Union hang in the National Gallery. The Brooklyn negatives sat in storage and were never published. The photographer’s son, screenwriter and producer Eli Attie, discovered them in an envelope with portraits of Capote in 2012. He felt the pictures and Capote’s essay belonged together, and how right he was.

Brooklyn: A Personal Memoir is a reminder of what a talented and skilled American writer he was. At one point Truman writes casually that he is considering retiring on Willow Street. You have to wonder if the older Truman ever regretted not going back.