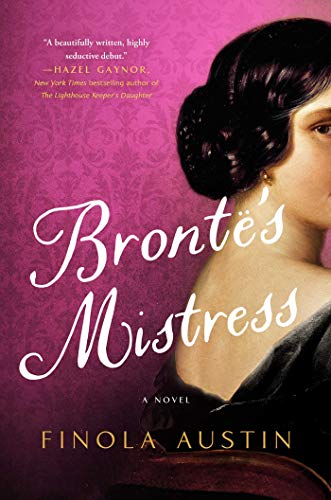 “Throughout the story Austin attempts to make a point of women’s lives during the 19th century presumably using this tactic to make Lydia appear as an independent woman with the desire to show independence to her daughters as well. This is a failed effort.”

Bronte’s Mistress by Finola Austin is a creative nonfiction novel based on a true story about Lydia Robinson, a wife, mother, and woman of wealth, who, while in her 40s enters into an adulteress affair with Branwell Bronte, some 20 years her junior. Mr. Bronte is the brother to the better-known Bronte sisters, Charlotte and Emily.

In the character of Lydia Robinson, Austin has created a genuinely unlikeable person who is driven by self-interest, self-pity, and greed. She is a woman who, with three daughters, prefers to leave their attendance to governess Anne Bronte, a woman whom she denigrates as often as possible. The teenage daughters are in a rebellious state throughout the entire story, and Lydia has neither the knowledge nor the desire to change that.

Anne is not of the same fame as her other siblings, but capable and liked by the daughters. When it is determined that Lydia’s son, Ned, is in need of a tutor, Anne encourages Sir Edmund and Lydia to hire her brother, Branwell. His reputation for excesses, particularly alcohol, precede him, but this does not prevent him from being hired.

The problem for Lydia is two-fold: her husband, Sir Edmund, pays scant attention to her, and Branwell pays too much attention to her. And here the relationship goes into overdrive as Lydia is drawn to him and before the story gets much deeper, they are having a sexual relationship any place they can. Lydia believes the affair is a well-kept secret, except that practically anyone within shouting distance knows about it—her daughters; her husband; the local doctor; Anne, the governess; the help—and a particularly odious housekeeper who continually blackmails Lydia to keep the, already unkept, secret. Gossip trends in 1843 are alive and well.

Add to this mix a disagreeable mother-in-law and daughters who obviously don’t like, much less love their mother, and the fact that Lydia’s youngest and most favored daughter died; and a son who barely makes an appearance in the story, and there are the makings of a tale rife with tension and conflict. And yet these tensions and conflicts only materialize for a flash and then the reader is back to listening to a rude character who blames everyone else for her lot in life

The affair with Branwell does not extend throughout the entire story, and it actually feels as though it is a rushed affair once Lydia tires of Branwell. When he is dismissed from employment, Branwell continues to write to Lydia begging to come back into her life. She ignores him, hoping he will just go away.

In the meantime, Sir Edmund has taken ill and dies, leaving Lydia and her daughters to their fate. She moves into her sister’s home, where the daughters are quickly taken under the control of Lydia’s sister and brother-in-law because they, too, know of her indiscretion. She struggles to find a better, more profitable way of life and writes to an old friend—a cousin—whom she had dreamed of marrying when she was much younger.

Contact is made with Baronet, Sir Edward Scott, and he invites her to live with him and his invalid wife. The girls remain with Lydia’s sister as Lydia moves forward with her life. A distant relationship develops between Edward and Lydia, and yet Catherine, the invalid wife, remains between them. Conveniently, Catherine dies, and Lydia marries Edward—and his wealth.

Throughout the story Austin attempts to make a point of women’s lives during the 19th century presumably using this tacic to make Lydia appear as an independent woman with the desire to show independence to her daughters as well. This is a failed effort.

Perhaps the book is just misnamed, as it deals more with the main character’s self indulgence and only half with the affair. It should be noted that Austin’s writing style is in keeping with the language of the day, and the book is well laid out in its chronology.