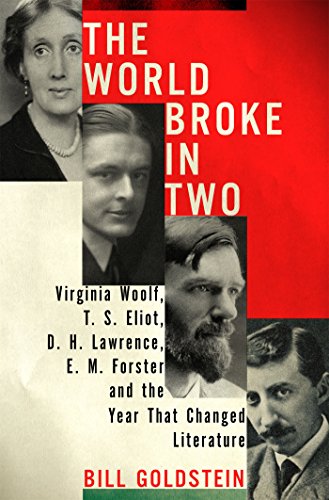 Although many consider that the modernist period of literature began just prior to the start of the 20th century and continued into the 1960s, and included many familiar names, it is the year 1922 that author Bill Goldstein has chosen to focus on, with attention to Woolf, Eliot, Lawrence, and Forster.

In the first four chapters he describes the introspection each of these four authors’ experiences regarding their writing and personal lives (including their focus on age), and through these experiences how each faces 1922 with some trepidation. In many instances, the time between publications was excessive, and it is clear that there was considerable low self-esteem, or perhaps a lack of self-confidence that each of these authors experienced. As 1921 ended, each faced the incoming year with fear of failure, and yet as the new year began, each sensed a revival of self-confidence through his or her writing.

As with many modernist authors, World War I often impacted how they told a story. Virginia was at work on ‘Mrs. Dalloway in Bond Street’ at the time
Lawrence wrote his ‘Nightmare’ chapter. Their approaches reflected their different styles and aims, and also their different experiences of the war itself, but they both wrote from the same awareness of it as a present thing, and even with the same fictional provocation for their characters.”

In these overviews, there are certain threads that intertwine through each person’s life including their health, personal relationships, and writing output. Goldstein takes these threads and weaves an intricate web, drawing them tight to one another.

Of the four authors discussed, Goldstein seems to give shorter shrift to D. H. Lawrence; there seems to be more distance between Lawrence and the other three authors. And yet questions of competence seemed to haunt him as much as they did the others.

The relationships between Woolf, Eliot, and Forster are conveyed through diary entries, newspaper critiques, and anecdotal conversations; and although there seems to be a touch of envy that often arises, on the whole the respect each writer showed for the other is well documented.

In addition to the well-developed discussions of these authors, there are interesting side stories about many of the mentors, editors, and publishers, as well as the aristocrats whose patronage of the artistic community of the time were invaluable to writers.

Goldstein discusses the role between Ezra Pound and T. S. Eliot in some detail. Eliot struggled with the completion of his substantial poem, “The Waste Land,” experiencing long periods of writer’s block, or perhaps better described as writer’s procrastination. Pound’s belief in Eliot’s skill as a writer is reflected in his ongoing editorial work and encouragement toward the writer in spite of Eliot’s often long delays in producing anything of value.

The personal lives of Virginia Woolf, T. S. Eliot, E. M. Forster, and D. H. Lawrence at times read like a crisis novel. Both Woolf and Eliot experienced bouts with the influenza that attacked Britain at the turn of the 20th century; Eliot’s wife, Vivienne, experienced sufficient maladies to suck the air out of his writing, and he faced his own mental health problems through a nervous breakdown.

Forster, fighting his own writing devils, fell in love with a man whose own health problems left Forster bereft. D. H. Lawrence faced extreme criticism as a result of his sexually explicit writings that were banned or not published at all.

In Chapter 11, Goldstein discusses the concept of book censorship, as it existed in America in the early 20th century, with commentary on Lawrence’s “Women in Love.” Gautier’s Mademoiselle de Maupin, published in 1835, drew much attention in the twentieth century American courts as a prelude to determining the negative impact of A Young Girl’s Diary, Casanova’s Homecoming, and Women in Love.

Although the courts recognized many passages in Gautier’s book “. . . taken by themselves, are undoubtedly vulgar and indecent,” it further judged “. . . whether a book is obscene or indecent…it must be considered broadly as a whole, and not judged from paragraphs alone which are vulgar and indecent.” This judgment alone gave hope to authors and publishers alike that a precedent may have been set for judging contemporary books under censorship rules.

Goldstein carries the four authors through 1922, bringing their relationships together into a tight pocket of interwoven fibers and yet still focusing on each as an individual and the importance of each author’s work. His reference to their individual works—Mrs. Dalloway, Jacob’s Room, Women in Love, Kangaroo, “The Waste Land” and A Passage to India just to name a few—provide deep insight into not only the writing challenges each author faced as they worked to complete their stories, but the personal journeys they undertook to bring each work to a successful conclusion.

In his epilogue, Goldstein brings these authors, and the importance of 1922 to each of them, together for a final overview, but the most important culmination is his reference to the impact of 1922 and Modernist Literature:

“Ezra Pound wrote to H. L. Mencken in March 1922 that the ‘Christian Era’ had ended at midnight on October 29, 1921, the night that James Joyce finished Ulysses.”

Although modernist literature is considered to have begun prior to the 20th century, it is clear that Pound believed that 1922 was the catalyst year when change truly brought new life to what was being written and published.