Bringing Up Father Volume 2: Of Cabbages And Kings 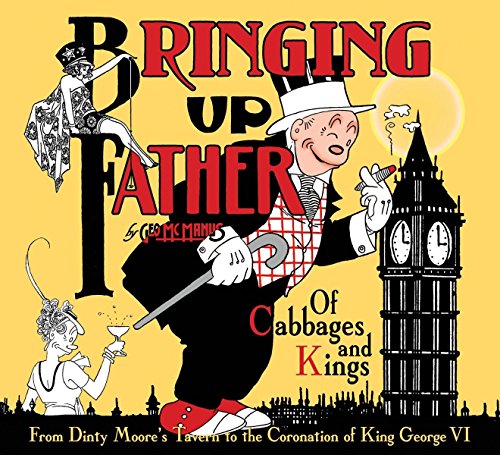 “A timeless classic from the pages of period long gone, . . . pure, classic art with a touch of vaudeville and slapstick.”

America may have totally eschewed the idea of a monarchy, but damn if we aren’t still taken in by the pomp and circumstance. In Bringing Up Father Volume 2: Of Cabbages and Kings George McManus generates a ton of laughs from this premise while also poking fun at many other aspects of daily life in both America and England.

Beginning in 1937, Of Cabbages and Kings details two years of dailies and Sundays. The collection centers on Jiggs and Maggie’s Atlantic crossing to see the coronation of King George. During the time this seminal event in English history was at the center of everyone’s mind. It also served as a much needed distraction from other events gathering momentum in Europe at the time.

The collection is a wonderful document of America’s fever and obsession with that terrifically English celebration of Royalty. It is also a window into a short period of time where the world knew war was coming, but was still uncertain as to what form that war would take. The Depression was showing signs of abating and for a brief period, positivity tempered by the very real feeling of dread was in the air.

The story opens with Maggie and her daughter planning to attend the coronation in England while Jiggs does his best to keep them from going. Mr. McManus is a brilliant storyteller who knew how to let a tale unfold at a leisurely pace. But he could still hold us in anticipation of what was to come next.

Once the family departs Mr. McManus moves the action shipboard. A world class traveler himself, he knew full well what life on board was like.

This was an age when it took weeks to cross the Atlantic, and he milked every joke possible. Since many Americans had either crossed the ocean themselves or knew someone who had, everyone could relate to the journey that Jiggs and Maggie undertake.

By the time Jiggs and his entourage hit England, the setup is primed for culture clash, and Mr. McManus delivers on every count. Hardly a strip will pass that doesn’t draw a smile from the reader.

A great part of the appeal of Bringing Up Father is Mr. McManus’ stunning skill with just pen and ink. When the strip debuted he was already a seasoned veteran of the comic art form having penned several other successful dailies before. A fanatical researcher, his strips offered readers an art-deco–influenced look that no other artist could hope to duplicate. His line had purpose, and he drew a world of clarity inside each panel.

Like the best of draftsmen he made the difficult look easy. The sight of Big Ben and the House of Parliament framed against the white of a cloud is as beautiful as the way he used black space to indicate the disappearance of London in a growing fog.

Mr. McManus was an expert at adding to a sight gag, giving the joke just one more nudge over the top.

When Maggie tells Jiggs that he needs to make sure they can see the coronation parade, he goes into another room and piles up drawers and chairs and takes a seat atop them. Poised atop this construct of imbalance, Jiggs sits holding an umbrella. As if the greatest danger to him is only sunburn!

He didn’t go there often, but as a writer Mr. McManus also loved a simple pun. When introduced to the Lord Hammond Rye Jiggs can only add that “He must be from the Sandwich Islands.”

The aspirations of clinging to a class system are always there to poke fun at. Readers loved Jiggs’ willingness to laugh at the pretensions of the upper crust. As he says to Maggie one day, “I’ve never been able to tell your friends anything. They think they know it all.”

Today Bringing Up Father has become so easily recognizable—so much a part of the American mindset that it was one of only 20 newspaper strips selected for celebration on an American postage stamp—that many forget how profoundly influential and entertaining the work of George McManus really was.

In the early 20th century the acceptance of Irish people into America was still a touchy point for many. This often forgotten prejudice persisted despite the fact that assimilation of Irish immigrants into American society was then moving into second, third, and fourth generations.

With a few strokes of his pen Mr. McManus’ strip directly addressed both immigration and class while wrapping his take on life inside the comfortable confines of a domestic comedy. The family of Irish that he drew traded on certain stereotypes for its humor, but in the end the familiarity of the situations at the heart of the strip is what kept readers coming back day after day.

In his introduction, Bruce Canwell, who also edited this collection, uses Mr. McManus’ biography as a way to create a loving picture of this period of time in history—a brilliant way to place the strip in its proper context. The introduction also includes numerous pieces of rarely seen art, photographs, and samples of Mr. McManus’ work prior to his success with Bringing Up Father.

A timeless classic from the pages of period long gone, Of Cabbages and Kings is pure, classic art with a touch of vaudeville and slapstick. A fascinating piece of history, the collection will never grow old and still offers up a thousand belly laughs.

Bringing Up Father beautifully and gloriously captures America and is filled with humor, insight, and breathtaking art.