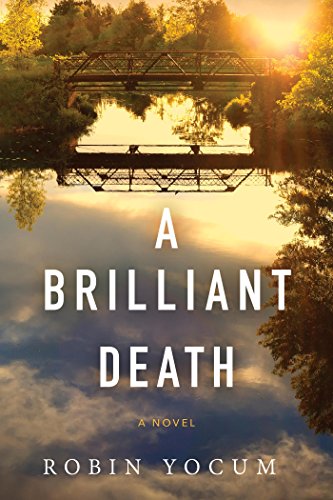 Yocum’s tale also echoes Krueger’s with the use of first-person narrators looking back over the decades to a dramatic story of death, deceit, adultery, and murder.

The scene in Yocum’s novel is Brilliant, Ohio, and the Ohio River Valley. The river plays a major role in the life of Mitch Malone and his best friend, Travis Baron. We know from the outset that Travis’ car went flying over a cliff into the river. We also know from the get-go that Travis’ mother Amanda drowned in the river 18 years earlier not too far, in fact, from where Travis’ car would later plunge. And sink.

The water isn’t the only thing that’s murky. It’s also not clear how Amanda Baron perished—and why. Amanda Baron’s death was the “scandal of the century in Brilliant.” Was she with a lover on late-night river rendezvous when the cabin cruiser was smashed to bits by a coal barge? What happened to her body? And her lover’s? “Wild speculation” abounds in Brilliant. Rumors say she’s been spotted alive everywhere from Chicago to Myrtle Beach. Amanda Baron’s demise became a local legend. Was it murder? Or something else?

The teenage buddies Mitch and Travis begin work on “Operation Amanda,” in part to figure out who is leaving flowers regularly at Amanda’s grave. The search leads them to sort through old junk in Travis’ attic. There are coroner inquest reports to digest, old library files to dig up. They quiz a disgraced detective who worked the case. The detective had suspicions but also spent time in jail for planting evidence on unrelated cases. Can he be trusted?

Because decades have passed, the smooth, understated writing has a reflective, passive tone. Yocum frequently begins chapters with scene setting—hunting carp in the river, reminiscing about a key high school football game, or detailing the history of mineral rights in the region. Yocum paints a vivid scene, and the full flavor of this era and place are pure Technicolor. Yocum’s eye for detail is sharp, but unless the high-schoolers were taking notes throughout the “Operation,” such details would not likely be dredged up and recounted several decades later. (Same thing for Krueger’s tale.)

The two boys’ work stretches for years, and at each turn they must tread carefully because Travis’ father, a.k.a. “Big Frank,” is a notorious hothead. In fact, we are told (again, right from the start) that Mitch Malone needed to wait until Big Frank’s death to tell the story.

The boys’ work spans years. Their investigation is linear, Point A to Point B. There’s a sort of Cinderella moment finding the owner of a missing shoe. A cop relays a long, helpful story to a couple of high school kids. Except for a few gritty moments of dialogue, the overall mood is genteel.

The identity of the antagonist is never in question. To accept how Travis and Mitch respond when they confirm the truth is to believe that they would drop everything, after years of work, on the advice of one, somewhat jaded adult. Travis’ ultimate plan is clever. It takes full advantage of both Travis’ “intimidating” intelligence and the ongoing theme of family. Some readers may feel underwhelmed by the sense of justice, or lack thereof.

Ordinary Grace involved moral complexity, in part, because the protagonist’s father was a Methodist minister and questions of faith were interwoven with the fabric of the plot. No such overt religious ponderings are embedded in A Brilliant Death, but Yocum’s plot does deliver on the double-meaning title.