The Bright Book of Life: Novels to Read and Reread 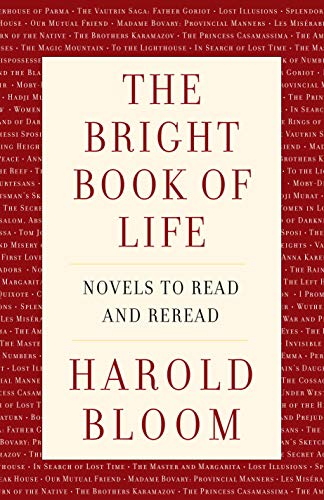 “The Bright Book of Life is a work worth dipping into again and again and following along with Bloom and his lifetime of reading the best of the best novels.”

Harold Bloom needs no introduction as one of America’s greatest literary critics. It is thus an understatement to name his posthumously published collection, The Bright Book of Life: Novels to Read and Reread, a true treasure of literature. That he was working on this in his final days is evident from the repeated mention of his age of 88 and from several comments throughout about death and dying. But what is The Bright Book of Life and who is it for?

The Bright Book of Life is not the incisive criticism the literary community has come to seek from Bloom. Within this tome, the tone is light, the critical insights often cursory or too abbreviated for a serious plowing under of a work’s hidden meaning. Clearly, that was not Bloom’s intent with this book. The Bright Book of Life is the reflection of a lifetime of reading from a great, deep, exhaustive reader of novels. Bloom gives a final assessment and ranking of his most beloved novels and distils his comments into a series of 48 mini-essays on 48 novels presented chronologically from Cervantes’s Don Quixote (1615) to Joshua Cohen’s Book of Numbers (2015).

While uneven in length, most “chapters” assume only a few pages while others like Don Quixote, Moby-Dick, and James Joyce’s Ulysses (clear favorites of Bloom) range into essays of 20 pages or more. Jane Austen gets three books in Bloom’s list, with Pride and Prejudice rising to the top of Austen’s works: “If the authentic test for a great novel is rereading, and the joys of yet further rereading, Pride and Prejudice can rival any novel ever written.”

In some cases, Bloom bemoans the neglected writer, as with Elizabeth Bowen, writing, “I fear that she is not widely read this time [2018], and I find that to be a great loss.” But within these, any reader of Bloom will immediately recognize the large blocks of quoted text. This is the Bloom style and is one that would, fairly or unfairly, earn low marks in a college composition. In this way, The Bright Book of Life edges closer to a commonplace book—a work of lengthy quoted passages that often far outweighs the few sentences of unpacking commentary that follow.

Bloom’s argument for rereading is loose and comes off more as an assumption on his part than a forceful thesis. Often, he throws in the joys of discovery with rereading, such as with D. H. Lawrence’s Women in Love when he writes, “The now appears stranger and richer, more original than I had recalled,” but it’s clear Bloom intends books to be reread and his own enthusiasm for the work carries this mantra forward. He strokes the drive to revisit works, such as Emily Brontë’s Wuthering Heights when he writes, “Rereading her at eighty-eight, I find, more strongly than before, that what fascinates me most is the abyss at the center of the book.” Indeed, a revisit of that work reveals Heathcliff as the novel’s dark hole, an all absorbing and infectious decay enveloping all the characters.

Deep readers will especially appreciate Bloom’s nod to secondary sources that accompany many entries. According to Bloom, Austen fans can turn to Paul Fry for more commentary; Charles Dicken aficionados can read Adrian Poole on him; Joyceans may turn to specific discussions on Joyce’s relationship to Dante through three works Bloom prizes; and literature enthusiasts at large can read Ernst Robert Curtius’s “extraordinary book” European Literature and the Latin Middle Ages which Bloom notes “has been reread by my so often that I [he] has worn out three copies.”

Any book like this may be criticized for the overlooked novels or the slight given to writers one might deem should earn a claim in Bloom’s pantheon. One such observation leads a reader to note the lack of any writer from a continent other than the European/American tradition, with Russia included here. Or another may be Ralph Ellison as the sole writer of color in Bloom’s work, firming the work up as a collection of mostly white writers. But this would be an unfair criticism it seems as Bloom sets out a reminiscence of his favorite novels, a goal subjective from the start.

So why would anyone spend their time reading a book about reading other books? Well, new readers will appreciate The Bright Book of Life as a touchstone for a superb reading list with Bloom’s prose commentary to add some flashes of insight to their reading. Seasoned readers will enjoy filling in the gaps in their own reading or dusting off forgotten favorites with Bloom there to highlight a few passages and, along the way, add an unforgettable nugget or two about the work. The Bright Book of Life is a work worth dipping into again and again and following along with Bloom and his lifetime of reading the best of the best novels.