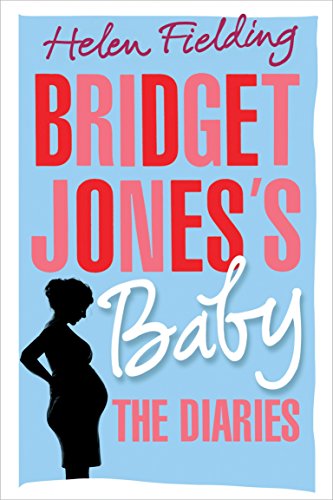 Readers’ favorite ditz is back in Helen Fielding’s latest, Bridget Jones’s Baby: The Diaries. With this novel, Fielding takes a giant step back in time from Bridget Jones: Mad About the Boy, her last Jones outing. Baby takes place around five years after Bridget Jones: Edge of Reason’s romantic reunion between Bridget and the steady but loving Mark Darcy.

Unfortunately, the joyful announcement of their upcoming nuptials was scuttled when an inebriated Bridget was found in a compromising position with playboy Daniel Cleaver. Five years on, both men have been married and divorced, and Bridget is still larking about with her singleton friends and sniggering at Smug Marrieds. A surprise meeting with Mr. Darcy leads to a long evening in his hotel room; Darcy’s scuttling off the morning after leads an age-worried Bridget to a comfort shag with Cleaver.

A few weeks later (and after Bridget learning that two-year-old dolphin-safe condoms aren’t people safe), Bridget comes to a sobering realization: she’s pregnant. The rest of the novel is a back and forth as Bridget tries to come to grips with her new reality while simultaneously juggling two expectant fathers, a visit from the queen, and a job that is becoming tenuous.

Bridget Jones’s Baby begins to go south almost immediately following a rather lovely introduction. After three previous books, the lifting the weight of disbelief that Bridget could continue to get herself into wacky situations is tough. Most feel forced: Bridget runs into Daniel Cleaver in so many awkward situations—at her own engagement party (why in the world would he have been invited?), at a women in literature party—and never seems to remember what an utter cad he was set up to be in previous books.

It is difficult to believe that with all her airheadedness, Bridget has held on to the producing job she miraculously landed in the second book. Observations like, “Everything is terrible. I mean, I just can’t believe that this is . . . Oh goody! Doorbell!” that seemed charming in the first book, when Bridget was a lighthearted 30 something, now seem sad and embarrassing.

The sexual politics of this novel are sketchy, as well. Fielding seems to take it for granted that Bridget would be okay with an overdone running “joke” about her breasts, and that female professionals would giggle like schoolgirls at the blatantly sexist Daniel Cleaver. Given the current climate of struggle over sexual equality, she may have badly misjudged her audience. What was considered acceptable in 1995 has changed.

Fielding seems to have lost the plot where Bridget is concerned. The best bits are direct quotes from the first novel, or in some cases from the first movie. Characters that were fresh and funny in 1995 have become one-dimensional caricatures of 90s singles.

Bridget’s friends, mother, even boyfriends each conform fairly exactly to their identifiable characteristic from the first book and movie; unfortunately, their lack of growth over the years and the exclusion of other character facets have left them flat and unbelievable. Each is much more linked to the movie version of themselves than to the far more nuanced characters in Fielding’s original book.

Only Bridget’s father has benefitted from his “movie-ization.” This Mr. Jones is definitely influenced by Jim Broadbent’s fantastic interpretation, leaving him more wise than whiny.

Fielding’s Bridget still has flashes of humor, and her father has a lovely amount of real wisdom to pass along. The novel hits a nice patch toward the end when Bridget takes some of that good advice and does a little growing up and nesting. This is the woman we’ve been waiting to meet for most of the book: in her cleaning and chatting, slotting friends and family into a mature life, and coming to terms with Darcy, Bridget becomes a character who is likable and believable for the first time since Fielding’s second book in the series.

An unfortunate and frankly silly ending spoils the short honeymoon with Ms. Jones. More boob jokes, wine spilled where no wine would rationally be, another dig at once again ditzy Bridget, and an appalling sex joke end the novel with a fizzle.

Bridget Jones’s Baby: The Diaries might appeal to long time fans of this series, but maybe not. The characters, drawn much more from the movies than from Fielding’s original and very funny novel, have lost their luster. With parenthood and marriage out of the way, hopefully our Ms. Jones will have the rest she so richly deserves.