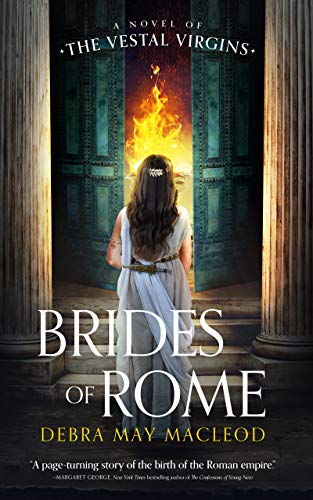 “A sweeping panorama of events set in motion to re-establish power in the years after the death of Julius Caesar.”

At the age of seven, Pomponia Occia is given into the service of Vesta for 30 years, but the story of this particular Bride of Rome really begins with Julius Caesar’s assassination. Until that time, the priestess of Vesta leads a routine life, but with the death of the dictator in perpetuum, things change.

“Rome was a beast with it head cut off, a beast that will destructively convulse until, like the Hydra, a head grew back.”

Cleopatra VII Philopator “notorious queen of Egypt” flees back to her kingdom, taking with her the son she bore Caesar. Marc Antony, Caesar’s general, whips the crowd into a frenzy with his obituary speech spoken over the dictator’s body, making certain none of the assassins gain public favor or escape punishment.

Soon, Antony will be an opposing force against the Republic of Rome. Sent to Egypt to bargain for grain and tribute, he also falls under Cleopatra’s spell and finds himself in rebellion against Octavius, Caesar’s nephew and heir.

“Antony would be difficult to manage when he arrived in Alexandria. Cleopatra sighed. Yet another artless Roman to seduce.”

Octavian is a Vestal patron. Though Pomponia is drawn into association with the new dictator and his wife Livia, she is more concerned with the actions of Quintus Vedius Tacitus, a soldier and Priest of Mars.

Quintus and Pomponia have known each other since childhood. In spite of being married with two daughters, Quintus declares himself in love with Pomponia. He isn’t subtle in showing his feelings, either. “Quintus exposed himself simply by the way he uttered her name. In one moment, he shattered years of pretense between them.”

His indiscretion leads his wife Valeria to make a charge of incestum, or breaking of vows, against Pomponia.

The punishment for incestum is for the priestess to be buried alive and her lover flayed.

The charges are proven false, making Quintus more subtle in his declaration. Nevertheless, he tells Pomponia that when her 30 years of service to Vesta is over, he will openly declare himself, divorce Valeria, and make her his wife.

When Quintus is sent to Egypt to keep an eye on Antony, he writes to Pomponia. “‘You belong to Rome now, but I swear on the Altar of Mars that you will belong to me one day. Tell me I’m the only man you’ll ever love. Swear it on the Altar of Juno.’”

For the first time, the Vestal priestess admits they could possibly have a life together after she leaves the worship of Vesta.

Neither realizes how greed and ambition will conspire to prevent that, nor of the historical significance of the events that are now part of their everyday lives.

Brides of Rome is a sweeping panorama of events set in motion to re-establish power in the years after the death of Julius Caesar. The story is told through the eyes of the vestal Pomponia, as she rises from priestess to the position of Vestalis Maxima, the head of the Vestal order.

The title is a play on words, the “brides” being both the Vestal virgins, as well as the women married to prominent men and the power they wield behind the scenes.

Though this novel is fiction, it includes a great deal of historical fact. Several actual Vestals have been combined to make up the main character. Antony and Cleopatra’s famous double suicide is played out differently from that of Shakespeare’s famous play or the film versions. Here, Antony’s death is an ironic misunderstanding caused by Cleopatra’s frantic desire to protect her children.

The characters are neither good nor bad but merely products of their time, and some will be remembered, some will be mere footnotes, and some will go unnoticed. A few will get the punishment they deserve, but the undeserving will also suffer devastating disappointment.

Those expecting a Happily Ever After ending to this story will be in for a disappointment, for as in actual life, there are often times when events do not lend themselves well to happy endings.

The thread running through the entire story is that anyone can be manipulated. Everyone in the story, from Pomponia herself to the mighty Octavian, Augustus Caesar, is at one time or another betrayed and maneuvered by others, while thinking he’s following his own decisions.

Octavian’s thoughts on this, as he gazes at Cleopatra’s corpse, are ironic in the extreme, unconscious as he is of the schemes of wife Livia and her sister Claudia that have brought him to that moment. “‘Thank the gods that Roman women are not capable of such trickery.”

If only he’d known.

This is Book 1 in the series. It will be interesting to see if Pomponia is featured in later volumes or if other “Brides of Rome” take center stage.