Bride of the Sea 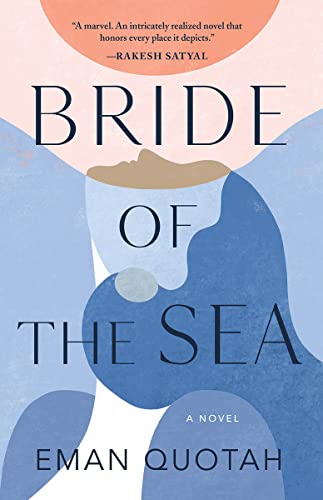 “The novel’s beautiful conclusion leaves hope that families divided by culture and geography will reunite.”

After Muneer divorces her and returns to Saudi Arabia, Saeedah decides that she must kidnap their five-year-old daughter, Hanadi. Otherwise, “Saeedah will be expected, by religious custom, to hand Hanadi over to her father,” 7,000 miles away in Jidda.

Actually, the kidnapping is the easy part. Bride of the Sea— the impressive debut novel by Eman Quotah, a Saudi-American researcher and nonfiction writer—explores the bigger logistical and emotional agony of the decades afterwards.

Saeedah and Hanadi move from one tiny rental to another, from city to city, changing their names, cutting their hair, hiding indoors, staying a month or three months in each place until Saeedah’s inner radar warns her that they’ve been spotted:

“A Buick or a Chevy—some car that could be her neighbors’ but definitely wasn’t—out on the street several days in a row. Or some Saudi she didn’t know watching her in the grocery store. She always knew they were Saudi before she heard them speak, by the particular blackness of their hair, the way the women wrapped their headscarves or didn’t wear them at all, the smell of the men’s cologne, some specific note in a child’s whine.”

Hanadi, who eventually adopts the Americanized version of her name, Hannah, first clings to her mother, then despises her for her lies. “I can never trust anyone because of her,” Hanadi says to one of Saeedah’s boyfriends.

Meanwhile, Muneer keeps calling Saeedah’s disconnected Ohio phone number. “His stomach has twisted so tight, he could pull it through a ring,” he thinks. Ignoring his family’s broad hints that he should remarry, he saves up his modest salary as a journalist to fly back to the U.S. whenever he gets a tip from a friend in Ohio or from the private detectives hired by his father-in-law.

Adding more layers of complexity, the pull and tug of America’s relationship with the Muslim world pulse through the 48 years spanned by this novel, from before the 1973 Arab oil embargo to post-September 11.

As Islamophobia takes on different vocabularies in the U.S. over the years, Westernization creeps into Saudi Arabia. Muneer writes news articles about Jidda’s “first department store, first shopping mall, first Safeway, first pizza parlor, first hamburger shop.” Saudi women of all ages seem surprisingly blasé about their lack of freedom, but the book ends with the optimistic announcement that they will be allowed to drive in just a few months.

Early on, in a rare moment of cross-cultural happiness, Muneer and Saeedah share their first Ohio snowfall, watching ”the flakes like thousands of tiny miracles.”

This novel suffers from a gaping hole, however: Saeedah. While pages and pages of often powerful writing are devoted to Hanadi’s and Muneer’s points of view, Saeedah’s voice is as stifled as if she were living in the most rigid, traditional Saudi household.

She is granted just one sentence justifying the kidnapping and no opportunity to explain some of her other wild actions, like walking into a freezing lake in the winter, heavily pregnant and wearing only her bra and underpants. There is little sense of any fear, love, anxiety, annoyance, or triumph she might be feeling as she flees across the U.S. with Hanadi.

The novel’s beautiful conclusion leaves hope that families divided by culture and geography can reunite. Reuniting those torn by emotions and memories isn’t so easy.