The Bricklayer of Albany Park 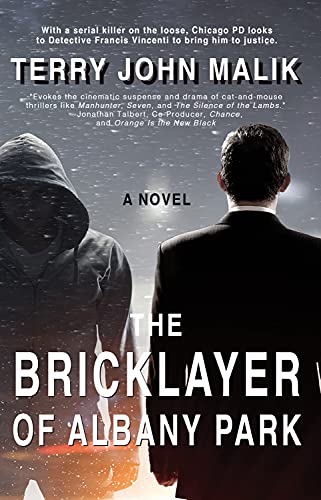 “a disturbing, yet masterful tale of murder and how childhood trauma may affect even those determined to rise above it . . . ”

Frank Vincenti has come a long way. Raised by a cruel, indifferent father after the death of his mother, losing his best friend as a teen, he put himself through college, becoming the protégé of Thomas Acquinas Foster, a former-cop-turned-teacher. Under Foster’s tutelage, Frank displays an uncanny observational ability to get inside a suspect’s mind, think the way he does. Abruptly, he finds himself groomed for the Chicago PD with no room for failure.

“‘Call me when you get the acceptance letter from the Academy, and if you don’t get the letter, don’t call again. Ever.’”

Now Frank’s a Chicago detective investigating a man the press has dubbed the Bricklayer, a serial killer targeting child molesters. It will be the case for which he will always be remembered . . . in more ways than one.

There are complications to the investigation even before it starts, on a personal level. Frank’s wife, a cocaine-addicted socialite, wants him to leave the force. She blames it for their deteriorating marriage. “Beth and I had been fighting more and more. She claimed I had a job while she had a career but I knew it was more than that.”

As his private life falls to pieces, Frank throws himself into the investigation to get into the killer’s mind to the exclusion of everything else.

“Sean attributed the arrests to what he described as my ability to extract a ‘feeling” for the killer by immersing myself in the crime scene. I believe I did more than just inspect and analyze. He claimed I also ‘sensed’ the killer’s presence. He called it ‘getting in the killer’s head.’"

What Frank doesn’t know is that the killer is very aware of him, and is in his mind, also. That’s the reason he dumps the body of one victim on Frank’s front porch.

As the second narrator, Anthony, aka the Bricklayer, justifies his crimes, the avenging of an attack on a friend he witnessed as a child.

“The ghostly memory was satisfied for now but it surely would reappear. I wasn’t avenging an attack on myself. I did it for my friend. I did it for all the innocent children among us. If only I could talk to Vincenti. I know he’d understand.”

More bodies are found, more pressure is put on Frank to solve the case.  When Frank’s best friend, Tony, reappears, he becomes the chief suspect. Partner Sean is jubilant because the case is now over; Frank doesn’t want to believe it.

“Frank, the prints match. They’re Protettore’s. This guy is a stone-cold killer, old friend or not.”

Then the case explodes, and the fallout strikes in places no one expects. With decades-old secrets spilling out, making words and actions previously confusing at least clear, the end result will haunt those who survive forever.

Alternating between Frank’s narrative and the killer’s, the story focuses on Frank’s ability to become the man he pursues to the point that he blocks out everything else, immersing himself in the killer’s mind. As Anthony’s motives are revealed, the weight of discovery as well as the pressures from Frank’s personal life strain the detective’s abilities to the breaking point.

Though Anthony details the stalking of each victim, surprising little description is given to the actual deaths, leaving the reader’s imagination to fill in the blanks—a refreshing departure from those novels in which the author near-lovingly lingers on each drop of blood and slash of the knife.

As the story takes an abrupt and unexpected twist, the revelation of the actual culprit will undoubtedly come as a shock. The author plays this moment to the hilt, in such a way even those readers priding themselves on out-guessing the author, may be forced to comment, “I didn’t see that coming!”

While the epilogue, told by a third party, may seem anticlimactic after the story’s intensity, it’s necessary to draw together the loose threads. In the end, that last sentence, delivered with its singular lack of emotion, will stay in the memory for some time, raising the question: Was justice actually served or did the anguished killer become the victim of yet another crime going unpunished?

In The Bricklayer of Albany Park, author Terry John Malik has written a disturbing, yet masterful tale of murder and how childhood trauma may affect even those determined to rise above it.