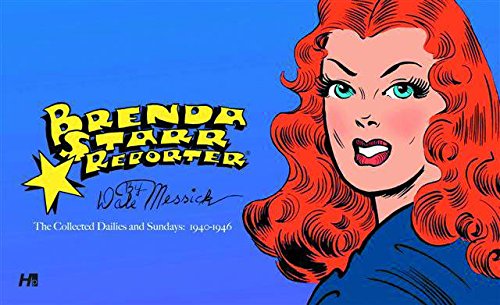 While female comic artists had been working regularly in newspaper comic sections for quite some time, the 1940 debut of Brenda Starr, Reporter was something brand new. For the first time in comic history an adventure strip had a strong woman at the center of the story.

She was a rarity in newspaper strips of the day, a working woman in the big city. One who more than held her own with the men in the office and who got the story when she was supposed to.

Over time the determined redhead grew in popularity. The strip began to appear in more newspapers. The dialogue was snappy and her fast-paced adventures inspired millions of young women and men. Prior to Brenda Starr newspaper strips created and drawn by female artists tended to focus on fashion, flappers, dancers, housewives and kids with their dogs.

By the fifth panel of her first appearance Brenda gets up from her desk and walks into her editor’s office demanding a crack at a major story. She simply can’t take being placed on the sidelines any longer. This was type of energy from a woman that was only seen on movie screens, and even than usually in comedies.

A take charge woman like this hadn’t been seen in the comic strip section before. Brenda was first. In fact it would be another full year before the mightily iconic Wonder Woman would even appear in comic books.

Reprinting a collection of story lines from her first six years in newspapers, Brenda Starr, Reporter: The Collected Daily and Sunday Newspaper Strips Volume 1 by Dale Messick is one rollicking reminder of how good the best of golden age newspaper strips could be.

Her start came in greeting card art but Dalia Messick knew she could crack the male-dominated world of newspaper comics. Even as a little girl she had been making her own comic books. When she got older and as she gained experience, Dalia began to submit strip ideas to the syndicates and editors.

For well over a decade Ms. Messick went the established route and submitted ideas to the powers that be. But something was different about her work. She didn’t create the normal type of strip. The women in her submissions were stronger and seemed determined to make their way in a man’s world.

In a must-read appreciation t the opening of this reprint volume award-winning herstorian and writer Trina Robbins outlines Ms. Messick’s journey through the twenties and thirties. Ms. Robbins gives the reader valuable insight into not just the importance of Ms. Messick’s accomplishments, but also reminds us how good the artist was at what she did.

Brenda’s origin storyline is strong and to the point. Not a minute is wasted. You can feel that Ms. Messick is almost bursting at the seams, dying to take the character anywhere she can. The action moves quickly and with a tremendous sense of momentum.

Brenda gets a scoop, has the story stolen by a male colleague, she is placed in mortal danger, goes undercover and in one famous scene is shackled to a radiator in handcuffs. Her shirt torn and her costume frayed she sends an S.O.S out through the radiator. This is a woman in charger of her own rescue.

“I wanted to create a book that gave an overview of the early strips. If we had printed the first two or three years of Sundays we never would have gotten to one of the most famous storylines of the feature, The Beastly Twins continuity in year three. After the origin storyline, many critics agree that the strip meanders around a bit until it finds it style. By 1944 the strip is incredibly strong. Ms. Messick is coming up with one winner after another. Plus real continuity doesn't start until five years into the strip when the dailies start and tie in with the Sundays.”

Reading The Beastly Twins storyline you can see Mr. Herman’s point. Ms. Messick’s pen line has grown more detailed and her sense of shadow and space has expanded. While other sections appear in color, Hermes elected to reprint the story straight from the original art work for this story which, stripped of the color as it appeared in newspaper pages, highlights Ms. Messick’s incredible skill as an artist.

A good Brenda Starr story contained a gutsy young reporter and plenty of intrigue. But there was also plenty of fashion, romance, exotic locations and flat out action. Sure, the boys had adventures strips galore. There was Buck Rogers in space, Tarzan in the jungle and a ton of detectives in every city in America.

But before Brenda Starr appeared, no one had seen a woman get in a scrap, take a black eye, laugh it off and go right back to work trying to get the story. Nor had they seen one with such an accurate shot with a book as she manages to nearly knock unconscious several of the men in her office when they fail to grasp how dangerous it is to mess with her!

Filled with original art, an appreciation of Ms. Messick’s creative process, posters from movies and Ms. Robbins’ insight into what it took to get Brenda to the page, The Collected Dailies and Sundays: 1940–1946 will still thrill new readers over 70 years after Brenda Starr first appeared.

Ready to take her place with the greats, Brenda Starr and the work of Dale Messick are prime for rediscovery.