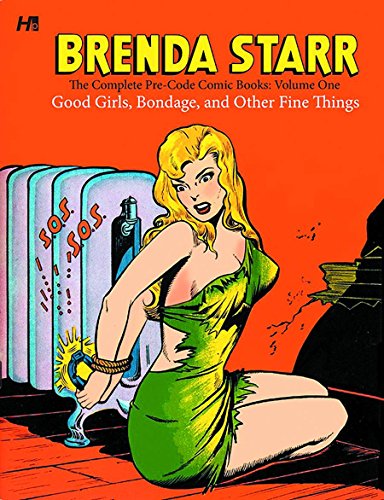 For decades Brenda Starr has been celebrated as one of the few newspaper comic strips to feature a strong, independent female in the lead. An anomaly in the world of newspaper syndication, she was also one of the even fewer strips that had been created, written, and drawn by a woman, Dale Messick.

While she was never a massive hit on the level of Prince Valiant, Dick Tracy, or Blondie, Brenda Starr had a solid and very loyal following. Looking to build on that audience the character was licensed to appear in comic books.

To do the extra work the syndicate and Ms. Messick parceled the art out to independent studios. Many artists who later went onto great careers in comics, advertising, and other fields got their start in these “art factories.”

It was the art studio that made the decision to move the character in a decidedly more adult direction. After all, who read the most comic books during WWII? Servicemen and young boys, that’s who.

Yes, girls who saw the newspaper strip loved the fashion and clearly identified with the adventure as well as Brenda’s plucky spirit. But those young girls were considerably less likely to drop a dime at the newsstand when they could see the same thing for free in newspapers.

The stories in this new anthology are great examples of a mild form “good girl” art. The images are relatively benign, especially by today’s standards where a sex tape is seen as a career move, but the artist’s intention is clear to all.

In comic books, and other forms of entertainment media of the time, good girl art is the four color equivalent of Betty Grable pin-ups found inside the locker door of numerous GIs. Brenda herself can be found in one or two of these full-page tributes to the form.

The work of one of the greatest of all good girl artists is featured in some of these stories. Matt Baker was one of the very few African American artists to work in the field of comic books during the early days. He developed a style so individualistic and of such high quality that others who worked in the art houses were told to mimic his work as closely as possible.

Another quality artist featured in this collection is Jack Kamen. Throughout his career he excelled at creating attractive women in the pages of four-color titles and in illustration. He is the man behind the “Brenda cuffed to the radiator cover.” A few years later he would make significant contributions to the memorable line of comics published under the DC banner.

Ms. Messick understood what the audience wanted as well. But her work is a touch milder than that which appears in the comic books. This first volume from Hermes Press also features original art from the daily strip. The focus is on Brenda as a cutout fashion doll. Outfits can be taken straight from the newspaper and by folding the added edges hang perfectly from the model provided.

The fashion cutout may have passed into history but at the time they were a staple of magazines, comic strips and comic books which featured women. They were seen as the ideal way for a young girl who couldn’t afford a doll to have something inexpensive to play dress-up with.

Some of the art, especially some of the covers from early in the title’s run, borders on obscene. Situations inside some of the stories find Brenda bending over a desk in a highly suspicious manner, taking phone calls in a wonderfully luxurious nightgown, holding a whip while appearing in jodhpurs, needing a bubble bath before going undercover or in one case handling a stalactite in a highly suggestive manner.

Some of this may be why the book later attracted the attention of authorities and ended up being sited as a perfect example of why comic books “contributed to juvenile delinquency.” Of course having your heroine cuffed to a radiator while wearing a torn dress on the cover of your book couldn’t have helped much either . . .

While the art may grab the attention, Brenda Starr is still an exciting strip with a strong and fearless woman at the center. Over the course of the stories she handles a blackjack with skill, rides a horse as fast as any man, confronts a tiger, swings down from a helicopter to land on a boat and just about anything else that a man would do in a strip devoted to a male reporter.

And she did it all in outfits to die for. Sex and the City for the forties.

Brenda’s run as a comic book hero may have been preordained. As historian and writer Ron Goulart points out in his introduction Brenda Starr’s first appearance was actually in a comic book. The Chicago Tribune included the strip inside an eight-page Sunday insert they had developed in relative response to the success of Superman in 1938.

The insert didn’t last but Brenda did. Over the years she inspired young women who saw a strong woman that would take no grief from anyone, man or woman and could handle her own in any situation. Men saw what they wanted to see. The syndicate saw money and America eventually won the war and went back to pretending that it was a chaste country with high moral standards.

No matter how you look at it Brenda Starr is an important part of comic book history and America’s cultural heritage. On one hand her character celebrates the possibilities of free will and determination; on the other it dresses those qualities in a sheer, translucent nightgowns and fuzzy slippers—as complex as any real woman.