Breakthrough Communities: Sustainability and Justice in the Next American Metropolis 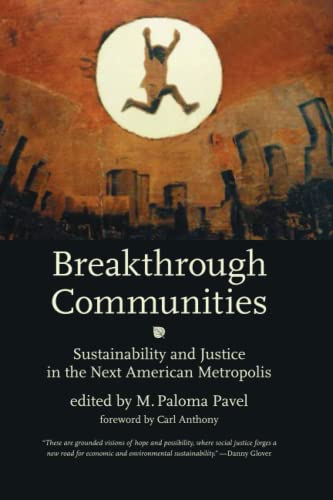 “. . . anyone concerned about the destiny of a place needs to comprehend and appropriately apply the insights and techniques of this seminal book.”

Breakthrough Communities, a collection of first-person commentaries of diverse urban activists and thought leaders, makes the important contribution of championing the need to bring strategy to initiatives spawned by community activism.

This populist, community based, place making manual advocates that the necessary focus “is to treat the city as the whole region, part of the larger ecosystem or watershed. This meant viewing inner-city neighborhoods, the downtown, the suburbs, the surrounding rural areas, the wilderness, the whole metropolitan region as interconnected—not as fragmented parts.”

This program necessarily involves coordinating multiple strategies concerning place, people, public sector capacity, and civic engagement. Particularly telling is the perspective articulated by Carl Anthony in the foreword that traditional planning education and conventional models of practice are ill equipped to deal with the important issues of places.

The subject volume is grounded in the reality that the breakthrough projects involve long, hard struggles; require focus on outcome paired with alliances with all allies that share some common interest; and may involve sharing “the glory and a good word, even with the people who you find most difficult to work with.” The Breakthrough Communities advocates whose stories are collected here seek to combine the sustainability objective—moving from a pollution-based economy to a green and clean economy, thereby creating eco-equity with a social justice program that emphasizes living wage jobs, rather than social services per se.

Politics is viewed as a means to create opportunities for income generation to enable disadvantaged people, frequently of color, to pursue rewarding, income generating employment.

Though the emphasis in this book is on creating economic programs that operate at the individual level, contributors to the book point out that cities are simultaneously expected to provide higher levels of social services at the very time they are starved for resources to do so.

Concurrently, many cities are rich in physical assets but poor in economic base. Rochester, New York, epitomizes this type of resource imbalance: plagued by poverty and job loss, even though the physical structures of the place are highly distinctive, even enviable.

The trilogy of important regional goals—equity, justice, and growth—is essential to creating vibrant communities in which all can participate. Priority objectives are affordable housing, combined with access to jobs, transportation, schools, shopping, culture, and parks. The favored program addresses three critical questions: Who benefits? Who pays? Who decides? and embraces four broad principles:

A particularly significant perspective, highlighted in Carl Anthony's foreword yet not developed with as much priority as it might, is the importance of beauty.

One of the especially engaging case studies in Breakthrough Communities is the story of the community activism that led to improving the conditions around the Los Angeles International Airport (LAX), to the benefit of the people adjacent to the airport.

By effective organizing, the community was able to achieve goals that resulted in dramatic improvements of the conditions of those who live in close proximity to LAX.

Another instructive story is the public planning process concerning possible scenarios for rebuilding the World Trade Center Towers destroyed on September 11, 2001. Involving some 4,500 people, sitting at tables of ten, the key common points emerging from such facilitator led discussions were posted on large screens visible to all.

One factor contributing to the growth in cities is that such television shows as “Seinfeld,” and “Friends” make dense urban places hip. By contrast, in the 1950s “Father Knows Best” and “Leave It to Beaver” glorified the suburbs.

While urban places are gaining much greater currency and interest, their leaders are often unprepared and ill equipped to cope with the challenges. The cumulative consequences of a half century of being told that cities are undesirable has led to a low levels of civic self worth. Consequently, vulnerable urban leaders all too often are easy marks for developers seeking massive subsidies for their projects.

Not only are urban places growing in scale and appeal, but their cultural character is dramatically changing. These shifts in place composition are highlighted by the very divergent growth rates of certain ethnic groups, highlighting the dramatic reconfiguration of the character of our metropolitan places.

Among the most strikingly powerful messages of Breakthrough Communities is the importance of what has been labeled the “inside game” and the “outside game” perspectives. The inside game involves self-organizing, community building, collaboration establishing, and shared strategies that are the primary thrust of this volume.

The outside game involves bringing in outside resources, third parties who provide perspective, expertise, objectivity, and a sense of possibility that might not readily be sourced or accepted, if they were to be advanced by a local player. Here, the outside game perspective can be invaluable in overcoming the silo, often isolated inside orientation, the very antithesis of the favored holistic, integrated approach.

At a time of ever greater individual place choice and place competition, when people expect more from their places yet their places have fewer resources to meet their expectations, anyone concerned about the destiny of a place needs to comprehend and appropriately apply the insights and techniques of this seminal book.