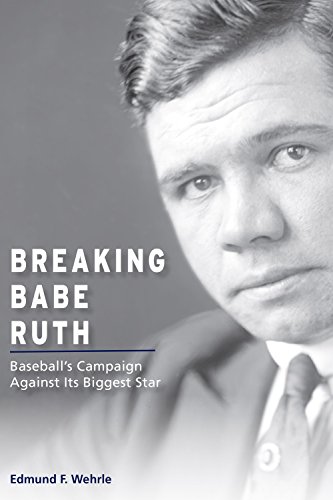 Babe Ruth was baseball’s biggest star, ever, his name appearing in the record books more than the Beatles sang the word “Yeah!,” a man who hit homers higher and farther than any fan had ever seen, eminently quotable, leaving behind hundreds of colorful stories in his wake. So it’s quite a significant achievement to manage to write a book about Babe Ruth that is so very dull.

The premise of Breaking Babe Ruth is worthy. The unruly, immature superstar goes up against the first Commissioner of Baseball, eternally dour Judge Kenesaw Mountain Landis, at a time when Landis was brought in to crack down on illegal and unruly ballplayer behavior. Later, The Babe locks horns with the management of his own team, The New York Yankees.

First the Black Sox. In the wake of the revelation, in 1920, of the conspiracy of eight White Sox players to accept money from gamblers in exchange for the corruption of laying down—not trying their hardest—against the Cincinnati Reds in the 1919 World Series, the 16 baseball owners hired Federal Judge Landis to oversee baseball and clean it up before fans would, en masse, turn their backs on potentially fraudulent contests.

On August 2, 1921, the eight accused “Black Sox” were acquitted in a Chicago courtroom. Jubilation lasted just one night, as on August 3, Landis banished the eight players for life. Over the next few years, Landis’ total would be 18 players expelled forever from the major leagues. The headcount is regurgitated here to show that Babe Ruth—though the game’s rising star—was one of many ballplayers who were the subject of Landis’ crackdowns.

Ruth’s transgression was embarking on a barnstorming tour after the 1921 World Series. These tours brought professional ballplayers to the far corners of the country, where a team of major leaguers would play a game against, usually, a local semi-pro team, and sometimes a Negro League team.

The exhibitions brought in some good coin for players and promoters. (Ironically, regarding an honest game, the opposing pitcher in these exhibition games would often agree to throw a fat pitch or two to the majors’ biggest stars—the fans were there to ooh and ah at Babe Ruth, et al., connecting on a long ball, not striking out against a no-name pitcher.) Ruth had toured after the 1919 and ’20 seasons.

But now that Landis was establishing himself as overlord, he saw the uncontrolled barnstorming as a wildcat threat to the major leagues and to his authority. He wanted the players to ask his blessing before arranging tours. In this case, as in the case of the Black Sox, the newly minted Baseball Commissioner wanted to loudly display his power. “No,” he told Babe Ruth.

Babe Ruth started the tour anyway. At Landis’ urging, newspaper reporters lined up against The Babe’s tour. After a few exhibition games, T. L. Huston, one of the Yankees’ owners—who had a good relationship with Ruth—caught up with The Babe in Scranton and persuaded him to call off the remainder of the tour. Huston paid off promoters to cancel barnstorming contracts.

Landis suspended Ruth and co-barnstomer-and-Yankee Bob Meusel for the first 39 days of the 1922 season. Landis thereby, for five weeks of the season, would deprive fans of their biggest star, and American League owners of their biggest ticket-generator. Babe Ruth promised to ask Judge Landis’ permission next time he wanted to barnstorm, and begged forgiveness. To no avail. Babe Ruth was “broken,” or tamed.

This 1922 dispute over barnstorming is one of the few worthy flecks of gold in the long, black mineshaft of Taming Babe Ruth, and the barnstorming dispute garners only a few pages, though it is part of the crux of the thesis. Unfortunately, Babe’s life is recounted in a similarly paced monotony, all of it taken secondhand from newspapers, books, and bits of audio and newsreels.

Devoid of good storytelling, the author recounts every year of Babe’s career, even though lots of those years have nothing to do with “breaking” Babe Ruth. The book is like reading a court reporter’s account of a lawsuit over a contract. Sorry to say, but the hundreds of endnotes are, generally, a better read, and lead to interesting original sources.

In the hands of a fine writer, someone who has a better feel for baseball, its history (the 1923 World Series wasn’t called a “subway series;” the term was coined later), and has the imagination to inhabit the skin of people who lived nearly a century ago, there’s a worthy book, or magazine article, hiding in this material.

Aside from the 1922 Landis-Babe Ruth dispute over barnstorming, other aspects of Babe’s life that fall under the “breaking” thesis are his contract disputes with the Yankees, and his desire to manage the team. Player-managers were a growing trend during the second half of Babe Ruth’s career, which ended in 1935. He believed he had the skills to manage, and that the Yankees, in part because his fame and performance had made them, over his years of service, the richest team in sports, owed him the opportunity. “Manage the Yankees? Babe Ruth can’t manage himself,” was the widely-quoted reply to Babe’s desire.

Toward the end of his playing days, and beyond, Babe Ruth was contrite, and quite well behaved, holding out hope that he’d be tapped to manage a major league team. Babe Ruth had been tamed—“broken”—if one prefers that word, by Judge Landis and the Yankees. One day that story will be enjoyably told.