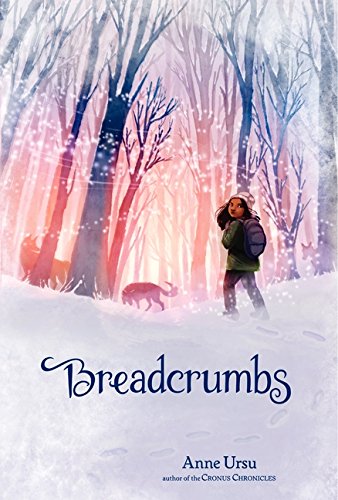 “Enhanced with Ms. McGuire’s frosty, atmospheric illustrations, Breadcrumbs intersperses elements of fairy tales and fantasies with the contemporary conflicts of the two friends. One of the author’s surprising twists heightens the novel’s tension and provides a stunning context for the age-old question: Am I my brother’s keeper?”

As bracing as a fresh snowfall, Breadcrumbs awakens the senses and sheds light on the desolation that lurks within a child’s world.

Long ago but not so far away, two friends were inseparable. Fifth-grade castoffs Hazel and Jack offer each other the trust and security their families do not. Hazel, adopted from India, once thought she knew her real home and family. Her confidence diminishes, though, after her parents divorce, and she’s forced to change schools.

Gone are her old friends, her comforting routines, and even her father, so caught up in his new life he pays little attention to Hazel. Her next-door neighbor Jack is the one person she knows who uses his imagination. Jack, neglected by a mother transformed by depression, relies on Hazel and his creativity to brighten his life. The two make up fantasies about dragons and dinosaurs and superhero baseball, bringing their own kind of magic to their Minnesota town.

The scaffolding for Breadcrumbs’ plot comes from “The Snow Queen,” Hans Christian Andersen’s intense story of a girl and a boy who become estranged when a shard of an enchanted mirror enters Kai’s eye. The looking glass warps his perception of people and the world, leading him both to cruelty and to admiration of perfection, as reflected in snowflakes or arithmetic. Soon he succumbs to the power of a cold, calculating witch and becomes detached from his past and even from the painful cold that envelops him in her kingdom.

Ms. Ursu is not the first to find inspiration here; C. S. Lewis’s White Witch bears a strong resemblance to Andersen’s wintry villain. This author’s lofty challenge, however, seems to be to hold up her own contemporary characters in the reflection of Andersen’s line of outcasts, thereby illuminating the interior world of a lonely child. Who has portrayed young misfits so powerfully as Andersen? The dying child in “The Little Match Girl,” the vain, self-absorbed girl condemned to dance in “The Red Shoes,” and the disowned daughter in “The Wild Swans” all drift into this magical book.

Enhanced with Ms. McGuire’s frosty, atmospheric illustrations, Breadcrumbs intersperses elements of fairy tales and fantasies with the contemporary conflicts of the two friends. One of the author’s surprising twists heightens the novel’s tension and provides a stunning context for the age-old question: Am I my brother’s keeper?

While Andersen has the pernicious shard somehow entering the boy’s eye as the clock strikes 12, the novelist hones in on her protagonist. It starts with Hazel feeling angry and left out as her best friend ignores her in favor of some boys who have taunted her. She hurls a snowball at Jack, not knowing it contains a piece of mirror that will pierce his eye and heart.

Jack becomes insensitive, uncaring, and reckless, and Hazel feels lost without her friend. Then something worse happens: He vanishes. Hazel bravely asks Jack’s parents where he is, but they provide such a flimsy explanation she refuses to accept it. She does believe Jack’s friend Tyler, though, when he describes how Jack went off with a thin white woman in her sleigh.

Showing herself to be a true friend, Hazel decides to save Jack, whether he wants to be saved or not. As Hazel enters the frozen forest, the novel’s atmosphere grows dark and surreal. Earlier in the novel, she thought of the woods as magical, “the sort of place she and Jack were supposed to go into together. They would bring breadcrumbs, and they would cross through the line of trees to see what awaited them.”

In stark contrast to that wondrous scene, Hazel must set off alone on a bleak, solitary journey for which she seems ill-equipped. She forgets her boots; she packs just a few snacks food; she doesn’t know where to go; and she lies to her mom in an effort to obscure her risky plan.

The journey into the woods is thrilling and, at times, bewildering. A flurry of fairy tale characters appears, and Hazel wonders which ones are trustworthy. The reader, also, might wonder how some of these people fit into the story.

While the forest’s motley inhabitants will delight fairy-tale lovers, their roles might insignificant, especially as most of them simply disappear from the story after their moment in the spotlight.

It’s true that Breadcrumbs drops minor characters and plotlines, but this device actually mirrors the fragmented nature of reality and how each person must somehow come to terms with contradictions, ironies, uncertainties, and the deceptive nature of appearances. Real magic, like real life, is neither simple nor pure.

Because of the cursed sliver of mirror, Jack perceives the witch as flawless. When Hazel encounters her, though, the witch so feared by him and the fairy folk seems freakishly insubstantial: “. . . [T]he snow was not snow anymore, but a woman—tall and lithe like a sketch, in a white fur cape and a white shimmering gown that looked so thin it would melt if you touched it. Hair like spun crystal framed cream-colored skin.” When the dark-eyed, dark-skinned heroine again connects with Jack, she demonstrates a warmth and singleness of heart the witch does not possess.

Of the many joys of reading this rich, symbolic novel, perhaps none surpasses the revelation of inner growth Hazel undergoes. She enters the woods full of doubts but discovers a strength she didn’t know she possessed. At turns either distracted by or urged to action by her experiences with fairy tales, Hazel learns much about the relationships between perceptions and reality.

People who appear to be helpers might actually be enemies, and vice versa. Sometimes what seems safe—like falling asleep in the snow—can be deadly. Led by the only reliable compass, a love for others, she will sacrifice all she has for Jack.

Yet for all that, readers who desire a neat, happy-ever-after ending will not find it here. Although the brave girl manages to bring her friend home, she cannot transform his family into a nurturing one. That conclusion would be too perfect to be true.

The Hazel who emerges from the forest has found the courage to cope with change. This confidence will enable her to find a place in her new world—unlike so many of Andersen’s sad characters. Breadcrumbs offers middle-schoolers traces of bright hope in the face of an often treacherous world.