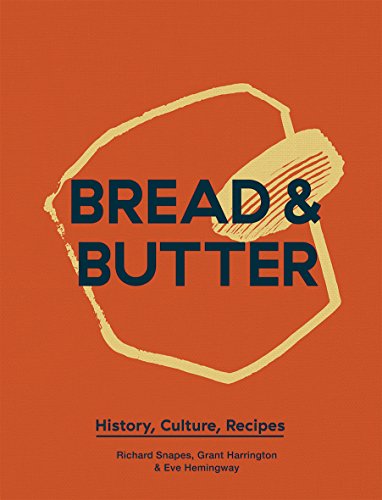 “The book is sure to inspire home cooks to try a hand at baking their own bread and churning fresh butter or spend time drooling over the scrumptious photographs.”

Bread & Butter is not your usual cookbook; it is a history lesson, a cultural overview, and a tender Valentine to one of the most delicious food combinations. This is a book you can really sink your teeth into and makes for an entertaining, educational, and drool-worthy read.

The book begins with brief biographies of the three authors. The trio has interesting stories to share, but it is their love of well-prepared, wholesome food that unites them.

Richard Snapes, founder of the Snapery Bakery in the UK, puts it simply, “Natural bread is digestible, delicious and makes a damn good sandwich.” Who can argue with that philosophy? He finds excitement, wonderment and delight in baking and his words and recipes are a testament to these personal feelings.

Grant Harrington is devoted to making the best butter in the world, so he created Ampersand Butter Culture. His devotion to his craft is evident in the buttery recipes and his explanation of the Science of Butter is a revelation. Recipes such as Wild Garlic Butter or Sundried Tomato Butter are truly taste sensations.

The third author Eve Hemingway brings her love of food writing to the talented trio. Cooking is all about making memories and Hemingway and fellow authors have written a book that is sure to create some new and joyful memories for a whole generation of cooks.

The history of bread and butter is a hefty portion of the book and is titled History & Culture. In this section the authors delve into the origins of bread and butter. Did you know that archaeologists have found evidence of a stone tool used for grinding barley and einkorn wheat about 22,500 years ago or that bread was a staple during Greek and Roman eras? There is a lot of history behind every slice of bread.

The authors trace the origin of butter from Hindu mythology to the early Middle Ages. An interesting chapter titled Bread & Butter: A New Marriage explores how the winning combination came about.

The reason for bread and butter’s popularity is “For foods so simple, the enjoyment is exponential.” The flavor of bread and butter is paramount motivation to those who make them or as James Beard would put it, “Good bread is the most fundamentally satisfying of all foods; and good bread with fresh butter, the greatest of feasts.”

From early recipes to changing fashions and even the Industrial Revolution (and World War 1) are all addressed in a fact-packed chapter titled Production & Craft.

The book includes a diverse and multicultural look at bread and butter in a chapter tilted Global Tastes & Traditions. From the classic French Baguette to Yufka, a Turkish unleavened bread, and everything in between are described in loving detail. For example “Olieboilen, a traditional Dutch or Belgian doughnut, literally translates as ‘oil balls’ and are now eaten in some form across Italy, Croatia, Slovenia and Serbia, most commonly at New Year’s Eve. They are sometimes filled with raisin, apples or candied fruit—and when cooked with animal fat instead of oil are called smoutebol.”

Another tidbit about butter: Mantequilla de pobre or poor man’s butter is actually smashed ripe avocadoes mixed with salt, pepper, and a drizzle of olive oil.

Just as your head is spinning with all these facts about bread and butter, you finally arrive at the recipes section. Mouthwatering photos of crusty bread fill the gaps between recipes such as The Field Loaf, Beer Bread, Hot Cross Buns and Kanelbullar (Swedish cinnamon buns). The Field Loaf and its variations may seem complicated, but the step-by-step directions and photos are helpful. This type of baking is not for everybody, but mastering the secrets of the sourdough starter is well worth the time and effort.

The Butter section is filled with information about how to churn your own butter, making flavored variations such as Seaweed Butter or Smoked Butter. If you like to cook with butter then you are in luck with recipes such as Butter Steak and Butter Braised Vegetables. There are butter sauces for those who want to try Buerre Noisette or Hollandaise or even Tibetan Butter Tea.

In the recipes section titled Bread & Butter, you will find the ultimate Grilled Cheese Sandwich, Brioche & Brown Butter Ice Cream, and Bread & Butter Pickles, along with many other tasty recipes.

The authors admit they hate wasting food and so there is a section titled Leftovers which features Panzanella, Bread Pudding, and Home Brewed Bread Beer, to name a few.

The delectable Buttermilk & Marmalade Gelato, the tangy Buttermilk Tart or Set Buttermilk recipes should satisfy those with a sweet tooth.

Whether you want Ribollita Fritters, a stack of Spelt Buttermilk Pancakes, or the Best Buttermilk Dressing, you can find them all in this enticing cookbook. The catchy photographs of all the recipes, including grazing cows, melting cheese, hardy loaves, and golden globs of butter all add to the book’s appeal. The book is sure to inspire home cooks to try a hand at baking their own bread and churning fresh butter or spend time drooling over the scrumptious photographs.