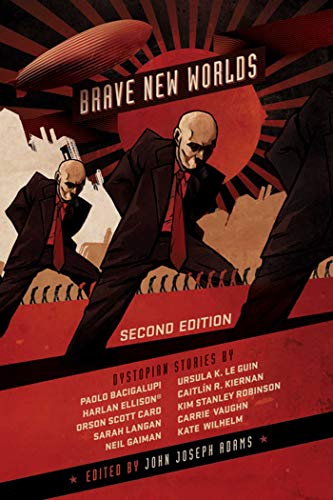 This is a world where the government has absolute control agriculturally, technologically, reproductively, and culturally. This is a place where it’s illegal to have children, because the elderly live forever. This is a place where people are stoned to death in the name of tradition, a place where jesters cause chain reactions just to throw the world off schedule. These places are called Brave New Worlds.

Brave New Worlds—edited by anthologist extraordinaire, John Joseph Adams—is a collection that seeks to revolutionize the definition of dystopian fiction by taking one of the oldest concepts in sci-fi, and the hottest authors to today and combining them into one, winning volume.

Adams has culled a careful selection of stories from today’s market. With well-known names like Harlan Ellison and Orson Scott Card—to relative newcomers such as Paolo Bacigalupi and S. L. Gilbow—readers are treated to textured and diverse styles of writing.

Standout stories include “Ten With a Flag” by Joseph Paul Haines, “Of a Sweet Slow Dance in the Wake of Temporary Dogs” by Adam-Troy Castro, and “Caught in the Organ Draft” by Robert Silverberg, among others. Orson Scott Card’s latest offering has his trademark characterization and personal feel, while Cory Doctorow’s follows his mode of detached, technologically-based science fiction. Each author is free to showcase his or her personal style of writing. And because of this literary freedom, there are very few stories that readers will skim or skip over.

The stories themselves are diverse in subject matter as they are in style, ranging from reproductive dystopias (Bacigalupi’s “Pop Squad”), to tales of poverty and claustrophobic surroundings (“Billenium” by J. G. Ballard). Neil Gaiman treats his readers to a story of political extremism told in comic-strip form, whereas Vylar Haftan treads the boundary between “utopia” and “dystopia” with her readers in the form of a choose-your-own-adventure tale. Some concepts (as explored in “Jordan’s Waterhammer” by Joe Mastroianni) are so farfetched as to not seem dystopian at all. But they all share the common thread of desperation.

These stories and styles, although different in texture and subject matter, really boil down to the same message: no one can wield excess power. By taking the concepts of the perfect society—immortality, peace, happiness—these writers seek, not only to entertain and enthrall with tales of the fantastic and extravagant, but also to shock their readers. In the great tradition of near-future science fiction, these authors (and their esteemed editor) seek to provide us with a picture of what the world could become, if society moves into any one extremity.

This stunning anthology will delight fans of science fiction and devotees of the dystopian genre alike. Its one major vice is, if consumed in one marathon session, readers will tire of the dystopian, and perhaps not give each story the credit it deserves. However, as one of the hottest subgenres in sci-fi, dystopian fiction is sure to continue its ascent, and Brave New Worlds will become a treasure for years to come.