Brave New World of Healthcare Revisited: What Every American Needs to Know about our Healthcare Crisis 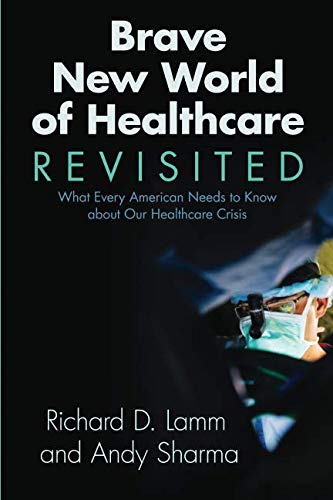 The strength in Brave New World of Healthcare Revisited is its brevity.

At a mere 192 pages, including the bibliography and author’s biographies, Mssrs. Lamm and Sharma are at their level best when they provide actual suggestions for reducing the trajectory of the bankrupting Medicare program.

Though means testing for entitlements is not a new idea, this writing duo provides a lucid case for meting out the problem of unsustainable costs in a government funded health care program. It would seem that the health care savings accounts or HCSA’s would fit right in with their idea of a personal investment plan.

The authors also succeed when revealing not just how much the cost of providing Medicare has escalated, but how much more the burden of that program has shifted to the government from the individual: from 50% when Medicare Part B (the outpatient care program) was created, to 73% today.

Though Medicare enrollees do participate in the cost of their services, they do not pay nearly as much of the escalating costs of health services as the program initially proposed.

This phenomenon is due to two items: the incentive of an unlimited federally supplied budget from which private health care providers, from drug companies, to medical equipment suppliers can siphon, and the explosion of Medicare eligible residents in the U.S. population.

Basically, this means more people using more health care services, which are disproportionately paid for by the government at a huge cost transfer to those of us who are still employed and paying payroll taxes.

Where Brave New World of Healthcare Revisited loses the reader is in the plethora of histogram-like charts—all tiny and seemingly spawned without a governor on the gas. And if you don’t know what a histogram is, no worries, because that doesn’t make the charts any less understandable.

Citations from the Institute of Medicine (IOM) and the 2010 United States census are illuminating. The strongest arguments are when Mssrs. Lamm and Sharma discuss the economic tradeoffs the nation is making by sucking so much money out of the economy for health care, versus putting it into education.

Kudos to this duo for pointing to the esteemed Rand study that showed that the uninsured population actually had better health care than the insured, because they were far more likely to receive appropriate care versus a barrage of unnecessary tests and procedures.

This is indeed a reflection of the U.S. health care system’s flaws, where providing more health care often does not result in better health individually—and the evidence suggests this is the case nationally as well. This problem will be exacerbated by the Affordable Care Act mandates, at least for a while, until there are the inevitable amendments to the mess.

Brave New World of Healthcare Revisited is a book written by economists for policy nerds so much of the discussion tends to revolve around economic and infrastructure terms, which make this a book best read by the university set.

For example, the contents under the header “Key Statistics for the Elderly” do not in fact merely refer to the elderly but to anyone on Social Security or Medicare. Not sure if the titillation comes from the key statistics or being called elderly.

Nerds will appreciate the deft comparison of demographic data, which reveal an increase in the proportion of females in the country since 1930 due to a reduction in maternal mortality among other factors. Another area of strength in Brave New World of Healthcare Revisited is the attention to low cost methods for improving health in the country, such as investing in health education—proven to work in other countries.

Overall, Brave New World of Healthcare Revisited provides some compelling economic arguments for rethinking how the United States delivers health care with the aim of improving the health of its citizens.