Brand Failures: The Truth About the 100 Biggest Branding Mistakes of All Time 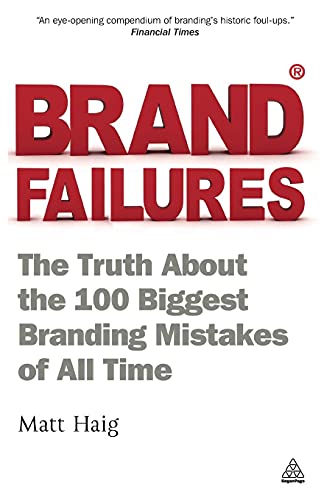 Brand Failures is the rare business book that’s actually a fun read for nonbusiness people. Since the book’s premise is to look at Grade-A mistakes, it’s intentionally humorous and light going in many places. Readers will learn the stories behind such well-known disasters as New Coke and Pets.com, as well as more obscure bloopers like Clairol’s Touch of Yogurt shampoo (yecch), Harley Davidson perfume (ah, the sweet smell of gasoline), and Earring Magic Ken (Barbie’s apparently gay boyfriend). What marketing genius thought anyone would really buy Bic underwear?

After a while, however, the reader has had enough chuckles and wonders when author Matt Haig will get to the point. Clearly, Brand Failures is intended for a more serious purpose, with a string of bullet-point “lessons” after most of the corporate comedy sketches. As Mr. Haig writes in the Introduction, “The aim of this book is to provide ‘how not to’ advice by drawing on some of the largest branding blunders of all time.” Yet there are too many examples and too many scattershot lessons, without a comprehensive lesson plan.

The 100 targeted companies are organized into 10 different types of failures (“culture,” “idea,” “extension,” “PR,” etc.). It’s a reasonable structure to start with, although a reader might argue with some of the classifications. Certainly the problems at Enron and Arthur Andersen weren’t just “people failures” due to some personality quirks of their chief executives, Kenneth “Kenny Boy” Lay and Joseph Berardino, respectively.

The structure falls apart once Haig starts to spell out his lessons. Not surprisingly, many of the failures stem from similar causes. Yet Mr. Haig coyly uses different terms in each “lesson,” as though pretending they weren’t the same. Polaroid failed to “be quick” when digital photography gained popularity, while Firestone didn’t “act fast” to publish information on recalled tires. The lesson from Perrier’s bout with toxic benzene in its bottled water is “don’t hide the truth.” The lesson from finding glass shards in jars of Gerber baby food is “provide information.”

Other lessons are flatly contradictory. The book castigates a slew of brands, including the British post office and MicroPro, for changing their names. But it advises Britain’s Rover auto maker that “if the name doesn’t work, change it.” True, every company is unique, and what works for one won’t always work for another. But why and when? What’s the common lesson?

Brand Failures desperately needs some sort of summary—either at the end of each chapter, or a concluding chapter—that would tie up this disorganized mishmash. It should use the same terms for similar corporate “lessons,” and then compare and analyze the various case studies. Are some kinds of mistakes more deadly than others? Do some tend to go together? Are some more common with certain types of products? Haig does a good job of the flip side, providing historical context and describing some positive “how-to” examples in the chapter introductions. But that’s less than half the job in a book devoted to “how-nots.”

Yet Brand Failures’s weakness—information overload—is also a strength. Mr. Haig has obviously done a huge amount of research, going back more than half a century and scouring industries worldwide, from cars to cameras to greeting cards, and more. Because this is the second edition of a book first published in 2003, he has added updates, including BP’s Gulf Oil disaster and the collapse of Lehman Brothers.

The hubris, lack of common sense, and failure to do basic market research exhibited by global business managers is simply astounding. After a few pages of this, the supermarket shelves will never look the same again.