The Brain in Search of Itself: Santiago Ramón y Cajal and the Story of the Neuron 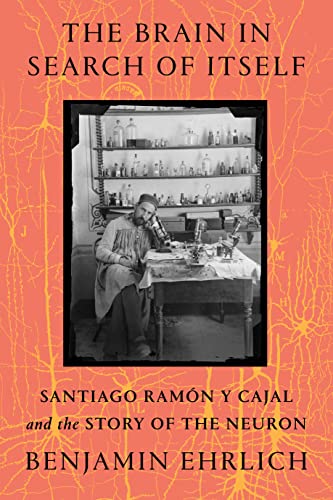 “As if his father weren’t enough of an obstacle, a stint with the Jesuits tried to beat every spark of original thought out of Cajal. He likened the indoctrination to ‘torture.’”

This weighty 464–page tome places the 1906 Spanish Nobel laureate alongside Charles Darwin and Louis Pasteur as one of the most original scientific thinkers of the 19th century. His novel invention of ways to stain brain tissue and shave it into ultra-thin slices for examination under the microscope (the field now known as histology) swept away existing orthodoxy that the brain was an undifferentiated net “a continuous tangle of fibers” without distinct parts.

Cajal devoted his life to studying the structure of neurons and came to conclude that the nervous system is composed of individual cells that have distinct roles just as in any other organ of the body. At an early age he exhibited a knack for drawing—a talent his stern, obstinate father tried to squash, going so far as burning a trove of his son’s magnificent, lifelike drawings.

The young Cajal prevailed, however, and throughout his career produced thousands of stunning, highly detailed anatomical drawings. “He scribbled constantly on every service he could find . . .  his chaotic energy channeling itself onto the page.” Ehrlich’s book includes a beautiful assortment that illustrates the neuron’s first development into the filigree we now know as the cell body branching into its dendrites.

Erlich’s is the first major biography in English of this nearly forgotten dissident who railed against convention as he rose from village poverty to Barcelona, to Madrid, to scientific chairs, to awards, and to international fame and recognition. He brought about a paradigm shift in how we envision the brain’s organization and even dared suggest that understanding the structure of neurons—“the mysterious butterflies of the soul”—might someday “reveal to us the secrets of the mind.”

Throughout his long career Cajal was driven by the single concrete question of, “What the nervous system looks like.” Thanks to his extraordinary visual memory, he “was able to hold the images of six or seven sections in his mind at once and synthesize them into a full–scale model.”

The narrative is peppered with famous names from the 19th century, and Erlich recounts an almost novelistic account of Cajal’s view of how the neuron develops and matures. “Science could engage his imagination as rapidly as literature could, and his penchant for fantasy, denigrated by his father and teachers, could finally be applied toward more useful end.”

At times Ehrlich goes into such nitty detail as to make the book read like a postgraduate textbook. While deeply researched, he also digresses into psychological and philosophical discussions, and even the politics of the Spanish Civil War.

Cajal did for our understanding of the brain what Galileo and Newton did for our concept of the physical world. As if his father weren’t enough of an obstacle to overcome, a stint with the Jesuits tried to beat every spark of original thought out of Cajal.

He likened the indoctrination to “torture,” and it instilled in him a lifelong distrust of authority and received wisdom. Political orthodoxy in science has not changed much ever since.