The Bradshaw Variations: A Novel 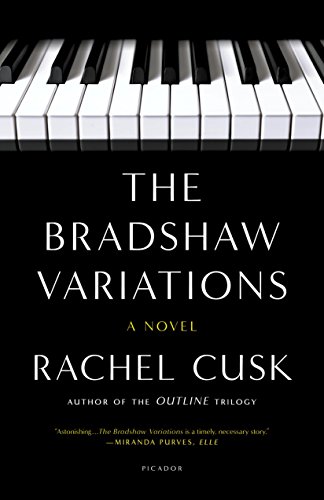 Contrary to expectations, Tolstoy’s well-known line from Anna Karenina, “Happy families are all alike; every unhappy family is unhappy in its own way,” does not apply to Rachel Cusk’s novel, The Bradshaw Variations. While her book is most certainly about unhappy families, its various characters and their familial relationships are undeveloped and often lapse into clichés. Cusk is a deft prose stylist whose novel, unsuccessfully, attempts to explore some thought-provoking issues about family, parenthood, and art.

The Bradshaw Variations is about the Bradshaw family, specifically the parents and their three sons, Thomas, Howard, and Leo, and their wives and children. The story focuses a bit more closely on Thomas who has recently become a house husband; his wife Tonie, who has returned to a job in academia; and their daughter Alexa.

The novel consists of a series of vignettes, each about a different character or branch of the Bradshaw family. Cusk examines marital and familial life in contemporary suburban London and the myriad tensions that arise in families and work.
Cusk’s prose is skilled and elegant, and at times, poetic. She describes Alexa sleeping: “She lies in her bed like a girl in a fairy tale. In sleep she is very soft. She exudes something, a kind of mist, as though when she sleeps she sets aside her solidity and takes on the transmutable properties of light and liquid and air.”

Often when describing a scene or a character, Cusk deftly creates apt similes such as in her depiction of Thomas’s piano teacher whose “body suggests itself through his unexceptional cardigan and corduroys like a statue through a dust sheet.”
Despite her descriptive prose, Cusk never creates well-developed characters in The Bradshaw Variations. Most of the figures in this novel represent abstract ideas.

Cusk far too often violates the “show, don’t tell” rule of creative writing by describing her characters’ thoughts or predicaments but not providing their own words, ideas, or actions. Ironically, guilty of the same crime, Cusk writes of Tonie: “When Antonia appears, it is to enact the qualities of contradiction and eccentricity that already define her audience. She is never developed, merely confirmed.” Cusk’s description is too abstract and she fails to provide the reader with sufficient examples or colorful detail to embody her observations.

Toward the end of the novel, in a chapter about Howard and his family, Cusk writes of Howard: “That though he wants more and more he is never really there, there at the root: but rather, like next-door’s cherry tree, whose boughs reach over into the Bradshaws’ garden while its trunk stands on the other side of fence, maintains a perpetual presence among them from which the fundamental comfort of belonging is forever denied?”

This comment about Howard, though gracefully written, is far too vague even at this late point in the novel, since Cusk has relied too heavily on such descriptions rather than on constructing a more fully fleshed Howard. The effect is tediousness and leaves the reader apathetic toward most of the characters.

Not only are the inhabitants of The Bradshaw Variations two-dimensional, but they are also unlikeable. The father of the Bradshaw men is described as cold, though little evidence is given to illustrate this. Most of the characters seem miserable in their marriages; the women are ambivalent about motherhood; and the grandparents are unpleasant. The novel is misanthropic and particularly misogynistic.

As in her previous work, Arlington Park, Cusk portrays motherhood and women’s lives as unhappy and unsatisfying. While this is certainly a worthwhile issue to examine, she does so without critical distance or insight. Because the characters and their lives are undeveloped, their problems are not compelling and leave the reader cold.

Novels certainly don’t need to portray happy people nor end happily; but this book, though well-written and smart in places, is judgmental, flat, and teaches us little. The unhappy Bradshaw family is unhappy in the abstract, not in its own way. This does not make for a very thought-provoking or satisfying novel.