Boys of Alabama: A Novel 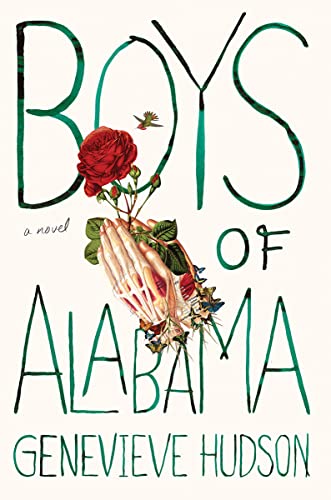 “Boys of Alabama is a beautiful book that carries the reader along on a tide of rich, eloquent language.”

There are two central characters in Genevieve Hudson’s powerful, poetic first novel, Boys of Alabama. The first is Alabama itself, a postlapsarian physical and social setting. The landscape is at times idyllic, at other times dangerous. Venomous water moccasins swim in clear streams. The woods can be beautiful or chaotic. Wooded roadsides are be filled with old washing machines and auto parts. However, the greatest danger to life comes from the death-dealing straight white men who live in the state. In this novel, masculinity is literally toxic. Violence seems central to the culture: violence toward nature expressed through hunting and other acts of casual cruelty and violence toward each other, expressed in acts of brutality including male rape. That violence is ritualized through football, the centerpiece of the state’s culture. Women have a tightly circumscribed place in this culture, yet heterosexuality is brutally policed.

Omnipresent is a particularly dark form of evangelical Christianity that seeps into the state’s politics, represented by the Judge, a charismatic figure who is both a political and religious force. The Judge, who is now running for governor, is an agent of death, urging his religious followers to handle venomous snakes and drink poison. Claiming to have risen from the dead after falling from a cliff, the Judge believes that the only test of Christian salvation is defying death. This perverse religion, too, is male-centered.

We see this Alabama through the eyes of a new arrival, Max, a 15-year-old German boy who wants to fit in to his new environment but carries with him secrets that haunt him. Max has a superpower—he can bring dead things back to life through touch. He hates his ability because it makes him different. What would his Alabama peers make of it? Would he be seen as diabolical? Max is also gay and his new home is deeply and violently homophobic.

Max has moved to this small Alabama town because his father, who is an engineer for a large German auto company, has been transferred to their Alabama plant, one of the large German auto plants that have moved to the anti-union American South. Max’s deeply secular parents have arranged for him to attend a Christian private school, God’s Way, because the public schools in the area are notoriously poor. At God’s Way, Max fits in by joining the football team. There is a sinister side to the bonhomie of Max’s pals on the football team, but he feels an acceptance he never felt in Germany. Through them, he comes under the influence of the Judge.

Max also becomes friends and lovers with the school outcast, Pan, a rebellious, gender-fluid Puerto Rican boy. As his name suggests, Pan is into magic and pagan ritual. He also has reason to despise and want to destroy the Judge. Max becomes torn between the Judge and Pan, the only person who knows his secret. Max becomes obsessed with Pan who carries his own dark secret.

Like many adolescent boys, Max wants above all to be accepted and dreads his unique gifts. He also craves a love that is violently punished. Can Max survive intact in this poisonous world? Will he, too, be poisoned? In this society, built on homosociality and homophobia, can male-male love—can any form of love—find a place? Max doesn’t realize that his is unwittingly engaged in a battle between life and death—that Alabama is a deadly place but he can be a force for good—for life.

Boys of Alabama is a beautiful book that carries the reader along on a tide of rich, eloquent language. We experience Alabama through all of Max’s senses. It can be beautiful or ugly, fragrant or putrid, depending on his mood. He has the sensitivity of a poet or artist, and Alabama native Genevieve Hudson’s intense, rich imagery captures the light and dark, color and drabness of the Alabama Max experiences. Through his eyes and Hudson’s language we see the malignancy of a perverted Christianity and brutal masculinity festering in the deep South.