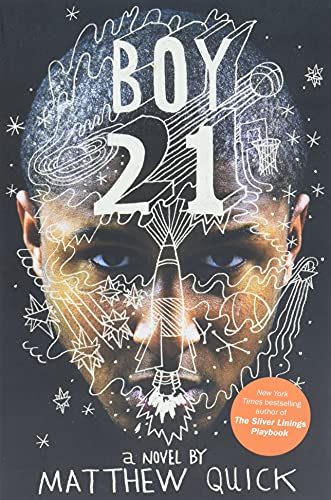 “All three teens have family secrets. . . . They also learn that disappointment and grief can transform into hope when you have love and good friends.”

If you’ve read the novels The Silver Linings Playbook and Sorta Like a Rock Star you are familiar with author Matthew Quick’s capacity to create emotionally at risk, eccentric, believable characters. His new young adult novel, Boy 21, adds Finley McManus and Russ a.k.a. Boy 21, to his list of quirky and likable characters.

Finley McManus is a high-school senior who has two loves: his girlfriend Erin and basketball. He lives in Bellmont with his dad and Pop, his grandfather, who spends most days drinking in his wheelchair while clutching his dead wife’s rosary. He has stumps where his legs used to be.

Finley longs to escape his Bellmont neighborhood where the Irish mafia and drug dealers hang out, racial tension fuels rivalries, and most of the basketball players at the playground are grownups who play ball every day instead of working a job. When he and Erin aren’t laying on the roof outside his bedroom window staring at the sky and dreaming of getting away, they work out together to stay fit for their high-school varsity teams.

Finley is a self-described minimal speaker. His basketball teammates accept him, but Erin is his only real friend. That changes when his coach asks him to look after Russ, a new kid who moves in with his grandparents after his parents are murdered. Coach confides to Finley that Russ is an exceptional basketball player who just happens to wear the same number, 21, and play the same position as Finley. Kindhearted Finley obeys his coach’s request.

Grief-stricken due to his parents’ murder, Russ only answers to Boy 21 and claims to be from outer space. Although Russ’s character is at times pretty far out-there—much like Finley—readers will sympathize with him. In spite of all the reasons it shouldn’t—including the realization that Russ is a better player and will get Finley’s starting spot on the basketball team—their friendship grows.

Every year during basketball season, Finley has a rule that he and Erin must break up so their relationship doesn’t interfere with their playing. Erin is the star on her team. She doesn’t like the break-up rule, but agrees because it’s only temporary. She knows they both plan to spend their life together in a better place than Bellmont. After an unexpected turn of events, Finley reevaluates whether basketball is really more important than Erin.

All three teens have family secrets. Finley’s mother is gone, and his family won’t talk about it, so he pretends that shooting baskets in his backyard is his earliest memory. Erin’s older brother is feared as the most violent Irishman in the neighborhood. Russ finds solace in imagining his parents are in a space ship and will soon rescue him.

As their family secrets unravel, each teen suffers loss. They also learn that disappointment and grief can transform into hope when you have love and good friends.