The Boy Who Said No: An Escape To Freedom 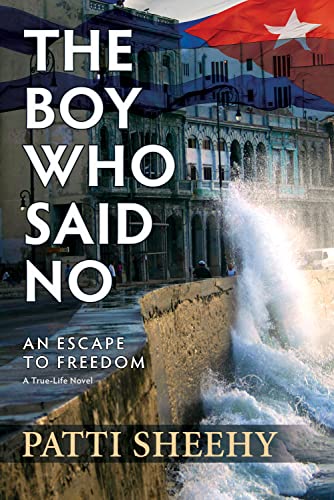 The Boy Who Said No is a work of historical fiction based on the life story of Frank Mederos who was born and raised in Cuba.

The story begins with Frankie as a boy living in a country of political unrest. Frankie’s beloved grandfather imparts fishing skills and other valuable life lessons and skills that will serve Frankie well in the future.

As the old government is overthrown and Fidel Castro takes control, Cubans are plunged into an even harsher world. The rebel army moves in. Schools close. Private businesses and private property are seized. An American embargo on commodities sent to Cuba is in force. Life is dire for Cubans, and many long to escape the country and Castro’s regime.

When soldiers recruit select young boys into a communist school in preparation for the army, Frankie is among them. His escape sends the soldiers after him and fails to prevent his later draft into the army.

While Frankie rises up through the ranks in his military career, he harbours a hatred for Castro. His outspoken views about the truth of the new government continually place him at risk. He longs for freedom, and plans to defect, but his position in the Special Forces make it difficult. His girlfriend has already left for America and Frankie wants to join her, even if it means never seeing his own family again. Once a Cuban flees, he or she can never return.

What follows is a harrowing, tense account of Frankie’s attempts to leave the country. Each attempt is loaded with risk and the threat of death. Timing is critical and poses his biggest problem.

The departure of the next, possibly last, available boat to take him into international waters clashes with critical military exercises, which will be observed by the highest levels of government. Due to his position in the army, Frank’s absence will result in a colossal manhunt. His attendance at the exercises could cost him his freedom and a future with the woman he loves.

Frank’s story delves into the most basic elements of the human psyche: loyalty, love, and survival. Whatever his decisions, he will have significant sacrifices to make.

His escape plans are complicated by his high-level military position and access to top military secrets. The manhunt will be intense, and the repercussions severe if he fails. No one can know, and yet he can’t do it alone. Trust is paramount, and Frank must place his trust in the right people. He will need every ounce of his intelligence, and every skill his grandfather ever taught him to survive. He will also need luck.

The suspense in this novel is terrific. It never lets up. Frank’s challenges and obstacles have the reader holding their breath from start to finish. The agony he faces over his decisions are palpable and the reader agonizes with him. Like a tide, hope surges and then fades, repeatedly.

All the while, Frankie remains in hiding, with little to no contact from his family or his girlfriend, as hundreds of soldiers use every resource to find him. Among them is one bitter superior bent on bringing about Frank’s defeat. The entire story is an emotional rollercoaster and the reader is along for the ride.

The theme is one of courage and determination, showing how those who have so little fight so hard for what they treasure. These people take enormous risks and put their own lives in peril to stand up for their beliefs and help others. It’s humbling. Frank’s story helps highlight the plight of refugees, which may not be fully understood by those whose birthrights relieved them of ever experiencing such hardships. The struggle to overcome the intolerable conditions brings out compassion in the reader. Or it should.

Throughout it all, Frank never forgets what his grandfather told him: to always do more than your best when it comes to love. Frank is a strong, thoughtful man. His concern for others in spite of his own problems makes him endearing.

The Boy Who Said No is a powerful fictionalized version of a true story and one that stays with the reader for a long time. The book concludes with the veiled promise of a sequel. Let’s hope so.