The Boy Who Could See Demons: A Novel 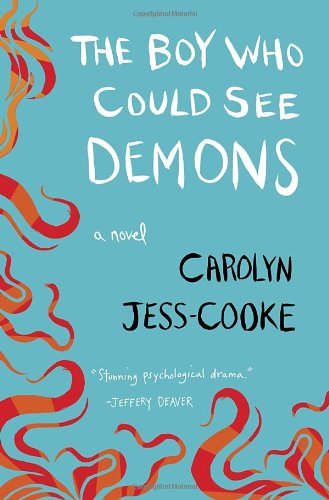 “The Boy Who Could See Demons is a well written, engaging read filled with compassion for those suffering the whims of an untamed mental illness.”

The Boy Who Could See Demons is a suspense novel set in present Belfast, Ireland.

In the opening chapter, we learn that six-year-old Alex Connelly can see demons.

Ruen is a Harrower from Hell and Alex’s only friend. He appears to Alex in four demonic forms, the most frightening of which is the monster. In exchange for granting Alex whatever wish he asks for, Ruen wants Alex to kill someone. This chilling hook grips the reader at the start of the story, and the suspense continues to build.

Dr. Anya Molokova is the child psychologist assigned to Alex’s case. The now ten-year-old Alex concerns her. His mother, Cindy, with whom he lives, has made a third attempt on her own life, which coincides with the fourth anniversary of Anya’s daughter’s death. Painful similarities exist between Alex’s life and Anya’s past, drawing her to the boy.

Secrets surround the death of Alex’s father. Only Ruen appears to know the true circumstances surrounding it and why he died. When he shares this information with Alex, Anya notes increasing turmoil within the boy.

As Anya works with Alex and senses him becoming a danger to himself, she goes against the advice of social worker Michael to separate the sensitive boy from his mother and place him as an inpatient at the MacNeice House Child and Adolescent Mental Health Hospital where she can observe him more closely.

During Alex’s performances in the school play, Hamlet, Anya witnesses disturbing signs that indicate he is more affected by the trauma and violence in his life and “The Troubles” in Northern Ireland than she first feared.

As she discusses his self-harming behavior with him, she determines his imaginary friend is at the root of the problem and believes she must find a way to get Alex into counseling and save him from himself. But the closer she gets to Alex and to the demons he sees, the more unstable Anya’s own life becomes.

The chapters rotate between Alex’s and Anya’s points of view, with his written in the form of diary entries, each beginning with a joke, and hers as observations of her frightening case study.

A poignant read, The Boy Who Could See Demons is a suspenseful novel that probes the issues surrounding and devastating effects of mental illness. The author delves into the psychological issues of schizophrenia and mental disorders with such dexterity it leaves the reader stirred and affected, questioning throughout the story what is real and what is not. As Anya struggles to understand and treat Alex, the darkness in her own life threatens to overwhelm her until even she starts to see things that defy reason.

The book is sad and in parts humorous. While the author manages to make the reader feel good in spite of the dark theme, we never forget the lingering presence of an ominous evil, and we are kept in suspense, waiting to discover the identity of the person Ruen wants Alex to kill.

As the conclusion draws near, the story takes unexpected turns, making it even more dramatic and compelling.

The Boy Who Could See Demons is a well written, engaging read filled with compassion for those suffering the whims of an untamed mental illness.