Boy in the Box (Fiction Without Frontiers) 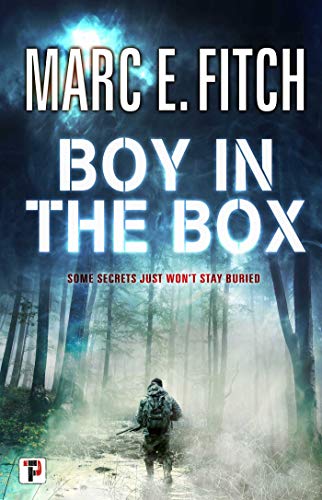 “This is one of those books the reader should never start if night is coming on and he’s alone in the house.”

“A tree falling in the forest may or may not make a sound, but the death of a child reverberates the world over with or without a witness.”

Ten years ago, Jonathan Hollis was about to be married. He’s on a bachelor party hunting trip with childhood friends Gene, Conner, and Michael when a drunken Gene decides to do some night hunting. Firing at what he thinks is the reflecting eyes of a moose, he discovers he’s shot a young boy instead.

There are no parents around and therefore no witnesses other than themselves. No one knows why the boy was where he was. After an emotional discussion, the four friends decided to cover up their crime.

“They laid the boy in the trunk, bending him into a fetal position so he’d fit. Conner locked and sealed it and together they dropped the trunk into the ground. The work took all night and by the end they were dead tired, dazed, and no less guilty.

Now, it’s ten years later, and Jonathan is attending Gene’s funeral. His friend killed himself. Why? Because Michael has learned that a highway is being built through that hunting area in Coombs’ Gulch and there’s a good chance the trunk containing the boy’s body will be discovered.

Michael said they had to go back and move the body. Gene shot himself because he couldn’t face that.

Jonathan has done his own soul-searching for ten years. He married two weeks after that fateful hunting trip but the shadows of the child’s death changed what should’ve been a happy marriage into a doomed affair. Now the only thing holding it together is his son, Jacob.

“It was all a fiction at this point. The only truth was a boy buried in a box somewhere in Coombs’ Gulch.

The boy in the box festered in the back of Jonathan’s mind. He felt the need to search through the online lists of missing children to find the answer, to place a name with the ghost that haunted his life.”

At last, he discovers the boy’s identity, but the child disappeared years before their hunting trip, in a state far from where he died. Jonathan has learned a lot about Coombs’ Gluch in the meantime.

It was named after a man who founded a cult, the Society of the New Dawn.

“His utopian ideals were anchored by something darker. He talked of gods in the wilderness, beings moving through the trees and haunting the mountains. Supernatural forces touching humanity and moving the world with an unseen hand.”

Then children began disappearing into the woods.

“Their rituals grew more fevered. Worshippers tried to appease the spirits to being back their children. The death toll rose.”

Though the three surviving men don’t want to return to that place, they force themselves to do so but nothing turns out as expected.  Something is stalking them as well as Jonathan’s family,and he’s certain he knows what it is.

A spirit haunts Coombs’ Gulch where unspeakable events occurred, and it’s now going to get its revenge on the three men who cheated it of one of its sacrifices.

This is one of those books the reader should never start if night is coming on and he’s alone in the house. Though there’s a great deal of description as opposed to dialogue, it’s mostly atmospheric, or internal, intending to set the scene of dire foreboding, revealing how a deadly mistake, a single decision to cover up a crime rather than report it, destroys not only a life but ruins those of the survivors of that crime.

Crime doesn’t pay, especially if the supernatural is involved, but its reverberations are more than that. It’s the fear all parents have of losing a child, whether by accident or by being abducted; the thought that a man may commit an even more heinous crime to regain that lost child. The first sentence of the novel and the last sentence read together summarize Jonathan’s entire life in his own estimation and will cause the reader to suffer a case of the chills that will linger for quite some time.