The Boxer's Story: Fighting for My Life in the Nazi Camps 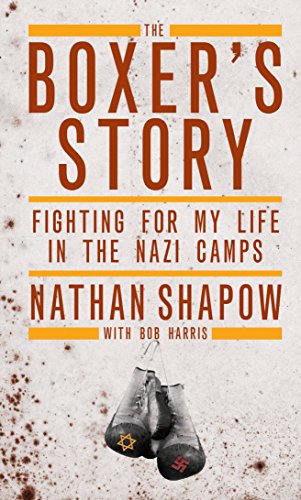 “. . . this memoir is an evocative and rewarding reading experience.”

This is the memoir of Nathan Shapow about a young championship boxer from Latvia who survives several Nazi labor and death camps during WWII, including Stuthoff and Auschwitz Birkenau. Born in Poland and raised in Riga, Latvia, Mr. Shapow’s survival is a mixture of courage, skill, luck, and physical conditioning.

Like most Jews in Nazi-occupied Europe, Shapow is captured and sent to concentration camps. As his boxing prowess and fame becomes known, he is literally forced to fight for his life against Nazi Army boxing champions. Shapow’s competitive nature and his shrewd boxing and street-fighting skills serve him well as he struggles to survive in despicable conditions.

Shapow’s youth vanishes in Nazi camps as his body is subjected to the ravages of starvation, forced labor, and sickness. At the same time, his mind is brutalized by Nazi guards who hound him unmercifully.

But Shapow’s will to survive will not surrender. He becomes a canny thief, stealing morsels of food whenever an opportunity arrives. Knowing that to be caught will mean a swift death, Shapow nevertheless continues to steal food, more precious in a Nazi concentration camp than gold. He shares what he pilfers with other prisoners.

After the war, Shapow illegally enters Palestine in search of his father, who also manages to survive the Shoah. Nathan joins Jewish paramilitary freedom fighters. Once more, his courage and fighting prowess are skills appropriate to the job. When Israel is declared a nation by the UN in 1948, Shapow leads soldiers into action defending Israel from repeated attacks by surrounding nations. During this time, Shapow is married and has children.

As is the case with many memoirs, fleeting segments leave some situations and characters bereft of detail. For example, we know that Shapow lived in very close proximity with hundreds of other prisoners of the Third Reich. Yet we discover almost nothing about them.

Similarly, we understand that conditions in the camps are horrid. But only cursory detail about the conditions is proffered. To the publisher’s credit, pictures of Shapow and his family before the war and after the war in his fight for the nascent State of Israel help illuminate a great deal. One could only ask for more in terms of maps and diagrams of the camps, his native Latvia, and Israel. Regardless, this memoir is an evocative and rewarding reading experience.