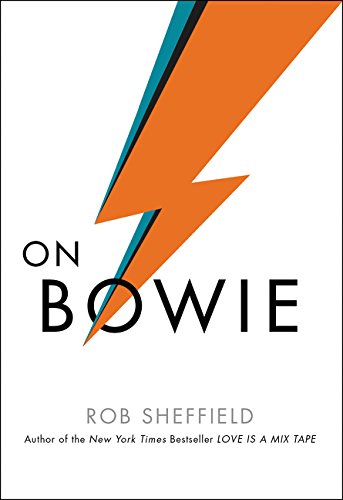 The journalist, biographer, and Rolling Stone contributing editor Rob Sheffield calls David Bowie a lot of names: tramp, vagabond, and “the most alien of rock artists” to name a few. He doesn’t call him decadent, though at the height of his fame in the 1970s, when he made Los Angeles his home, Bowie played with decadence in the manner of a jaded, exiled Englishman reborn as a TV personality in sunny southern California.

In the acknowledgements at the back on this short, compact, well-written book about Bowie’s flamboyant career in music and film, Sheffield says that Carrie Thornton, the editorial director at Dey Street Books, called him the day after the star died.

“Can you write a book about him in a month?” she asked. Sheffield replied, “Well, he made Low in a month.” Whether he actually wrote this book in the same amount of time it took Bowie to make Low, his eleventh album, he doesn’t say, though the last four chapters, which cover the years 1984 to 2016, when he died of cancer, feel a bit hurried.

At one point, Sheffield says that not much is known about Bowie after 1987, when he turned 40, the same year that he released Never Let Me Down. Six years would elapse before he released another album, Black Tie White Noise in 1993. For all his fame, publicity, and his extended time in the public eye, Bowie remains a largely private figure. The lyrics to his songs might be the best index to his personality.

Sheffield describes David Bowie’s boyhood in England, where he was born David Jones in 1947, his choice of the stage name Bowie, his attachment to the music of Aretha Franklin and James Brown and, near the end of his life, his marriage to the fashion model, Iman.

Sheffield might have written a 600-page book about Bowie’s many personae, his use of cocaine—“Peruvian flake” he calls it—and his provocative comments about fascism. “I believe Britain could benefit from a fascist leader,” Bowie said in 1976, though Sheffield argues that he didn’t really mean it. Then there was The Hunger, the 1983 vampire flick that Bowie made with Susan Sarandon and Catherine Deneuve and that helped to recreate the vampire movie genre.

On Bowie is a nifty introduction to the man who first became famous for the song, “Space Oddity” that features the fictional character, “Major Tom,” a world-weary astronaut who loses contact with Earth and laments his fate. “Here am I floating/ round my tin can/Far above the Moon/Planet Earth is blue/And there's nothing I can do,” Bowie sings.

Sheffield writes nearly as lyrically and poetically as Bowie. And he’s not afraid to hide his love for the artist who faced “the strange” and spoke to “the freak in everyone.” The book flows chronologically; Sheffield takes detours from his narrative about Bowie to recount his own feelings about the albums and the movies. It all hangs together.

The book ends with the release of “Blackstar” in November 2015, two months before his death, a song that Sheffield calls “one of his best ever.”

The Notes at the back of this book offer a concise Bowie bibliography. At the top of Sheffield’s list is Nicholas Pegg’s The Complete David Bowie, an essential source for all fans. If nothing else On Bowie will send reader off to other books about the artist, and to the 26 albums he released and the 23 movie and TV shows in which he played a part, including Twin Peaks, where he animated the role of Philip Jeffries, a rogue FBI agent.

Bowie was always fascinating to look at and to watch, whether on stage or on screen. Sheffield’s biography contains six stunning color photos of Bowie, from 1970, where he looks young and innocent, until 1995, where he looks like an exhausted Earthling from one of his own songs.