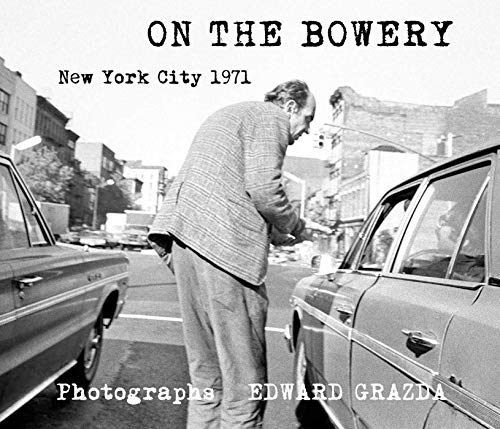 Edward Grazda’s On the Bowery: New York City 1971 was inspired by Lionel Rogosin’s 1956 film. Before gentrification the Bowery represented New York City’s skid row. In candid black-and-white photographs, Grazda captures the Bowery and its denizens. Bums, hustlers, dive bars, and flophouses dominate the images. The book contains no captions or contextualizing apparatus except for a short letter.

Writing someone named Sam, Grazda explains how he “came up with this book” after visiting the MacDowell colony in 1999. (The renamed MacDowell is an artists’ colony in New Hampshire.) Although the photos “were made over a few months: September–December 1971,” he thought “that they were too intrusive to show.” He is correct in that regard.

As autumn leads to winter, the plight of the down and out would become more urgent. Getting caught outdoors in winter could be fatal. It is reflected in the faces and the postures. Hunched on the curb or leaning on a lamppost, the men work hard to get by. This is a male-only world, one fraught with desperation, poverty, and violence. Grazda took a photo of a body underneath a sheet on the pavement, a hand and a Converse-clad foot exposed. The Bowery does its best to grind down these men. Some resist the entropy while others appear defeated. The faces tell the stories. They look craggy, grizzled, and worn. In a word: ugly. But Grazda frames this ugliness—in the faces, in the architecture—as an engine for creating wordless narratives. These are faces that have seen some stuff.

Despite the gendered nature of the Bowery, it is a multiracial neighborhood. Young and old collide. Old doughy men with crew cuts are seen, along with mustachioed hippies and black men in berets and leather jackets. Some subjects ignore the camera as others glare, their expression saying, “What you lookin’ at?” These raw images of urban poverty contrast sharply with the images captured by Dorothea Lange of rural poverty during the Great Depression. Grazda’s photos aren’t about quiet dignity and a martyr’s endurance, these are images of defeat and despair.

On a historical level, On the Bowery has preserved for posterity a New York City long since forgotten and erased. It is a New York gritty and dangerous. Look at these images and play “Shattered” by the Rolling Stones or “A Walk on the Wild Side” by Lou Reed. To avoid over-sentimentalizing the Bowery, nostalgia shouldn’t be abused. Grazda took to the streets in the Bad Old Days, a time when poverty and violence ravaged the metropolis.

Is post-gentrification blandness any better? While the buildings have been replaced by upscale retailers and high-end condos, the more important question remains: Where did the people go? Pushed out, but pushed out to where? Urban renewal can kickstart economic recovery, but it can also work as an eraser. Grazda’s images show a New York City before it erased entire neighborhoods for expensive shiny blandness.