The Bourgeois Between History and Literature 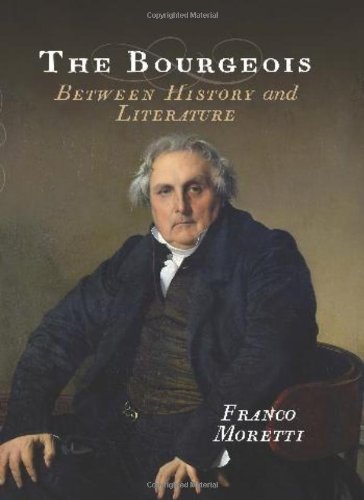 “. . . an informed, engaging, entertaining, exploration of how capitalism created and then destroyed the ‘middle state’ of society.”

The great sociologist Max Webber could at the end of the 19th century proclaim his allegiance to the bourgeois, having “been brought up on its opinions and ideals,” such a sentiment has deteriorated to irrelevance asserts Franco Moretti in The Bourgeois: Between History and Literature.

At one time the bourgeois, of “ship builders, industrialists, financiers, merchants, bankers, developers, administrators, judges, managers, lawyers, doctors, headmasters, professors, engineers, pastors, journalists, photographers, designers, accountants, clerks, predators were ‘a class in the middle,’ overshadowed by those above it and innocent of the course of the world.”

But no more. Today these trades, roles, and professions are increasingly perceived as “the ruling” class. Connecting the dots—some of which are covered explicitly in The Bourgeois, and others not explicitly addressed may be inferred—if we are all strivers in contemporary society, then how can there be a middle?

Following introductory concepts and contradictions this meandering meditation—spilling over with insightful and provocative observations—is organized in five sections: embracing work, the serious 19th century, fog, the semi-periphery, and the spirit of capitalism. Among the literary lights whose work is examined, dissected, and interpreted are Daniel Defoe, Honorẻ de Balzac, Gustave Flaubert, and Henrik Ibsen.

This very randomness of contemporary life—what Robinson Crusoe’s father warns his son against: pursuing adventures abroad intended to advance by enterprise—inherently involves putting the security of the “middle state” at risk. Specifically, his father cannot comprehend the rationale for abandoning the “middle state” between the hard work and suffering of the lower state, and the prideful insecurity of the upper state, for adventure and enterprise.

Today, with career choices in disarray—ever greater numbers of once sure thing careers are crushed on the rocks of creative destruction—more and more individuals, whether by volition or circumstances, must embrace the equivalent of merchandising adventure trade.

Rather than offering goods for sale to known customers, “adventure trade covered those cases in which the merchant sets off with his goods without knowing exactly which market he would find for them.”

As divergent as are places, every place story is the same, for, the author asserts, “there will be differences, of course, among stories emerging from Madrid and a small Sicilian town, from Poland or Russia; but the embattled coexistence of capitalism and the old regime, and the—at least temporary—triumph of the latter, are common to all, and create among them a strong family resemblance.”

Franco Moretti does not suffer fools. And, he employs a sharp pen in rendering his judgments, writing, “religious sentiment . . . is in fact growing, in a sharp reversal of earlier trends towards secularization.

Similarly, for the great technological advances of the 19th and late 20th century: instead of encouraging rationalistic mentality, the industrial and the digital “revolutions’ have produced a mix of scientific illiteracy and religious superstition—these too, worse now than then—that defy belief.”

He suggests that the United States is the worst of offenders: a place where “a key ingredient has been the drastic infantilization of the national culture: from the pious idea of ‘family reading’ . . . to the syrupy replica—the family, smiling at its TV—that has put American entertainment to sleep. And the parallel can be extended in just about every direction, from the anti-intellectualism of ‘useful’ knowledge, and of much educational policy—beginning with its addiction to sports—the ubiquity of words like ‘earnest’ (then) and ‘fun’ (now), with their thinly disguised contempt for intellectual and emotional seriousness.”

But if honesty is an integral value of the bourgeois, then if there is no honesty in contemporary society, “how can the bourgeois exist, in the face of capitalist megalomania?” Whereas once the “capitalist and the bourgeois were perceived ‘as two sides of the same coin’ today capitalism is more powerful than ever, but its human embodiment seems to have vanished.”

Whereas once the Bourgeois stood for stability and security, today—in the worlds of commerce places and literature alike—the once presumed “safe middle” is no more.

Franco Moretti offers a rewarding, thought provoking, mind expanding excursion through evolving social order of recent times. A highly personalized partisan essay, with no encyclopedic ambitions The Bourgeois is an informed, engaging, entertaining, exploration of how capitalism created and then destroyed the “middle state” of society.