Bound in Wedlock: Slave and Free Black Marriage in the Nineteenth Century 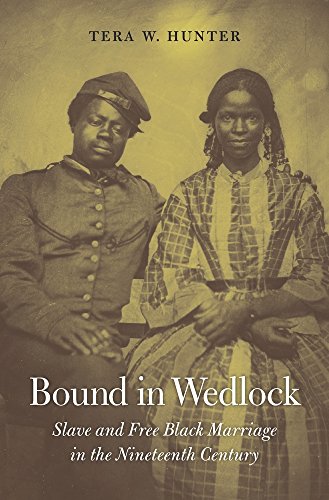 The history of the United States is still full of topics yet to be researched, explored, and revealed in book or other form. With society's present mantra of tolerance and diversity, it is only right and natural that a historian has made the effort to delve into black marriage in the 19th century, considering the overall impact, particularly of the Civil War, on intimate relationships and wedlock by white domination of society, law, and government.

Not only was this domination convoluted and counterintuitive at times, but there was the overarching principle of property rights which, as a result, compounded the considerable turmoil and chaos evident in black relationships overall.

As property or not, blacks had no legal standing or civil right to marriage as whites did. As chattel, many of the so-called wedding ceremonies were informal and sometimes arranged by the slave owner against the will of one or both parties. Not surprisingly, with no legal legitimacy, these unions could be easily torn asunder when one "spouse" was sold to another owner or the parties lived on different plantations where the possibility of extramarital straying was manifest.

In addition to being labor capital, black women were also desirable for their reproductive labor. Having children increased the population for work purposes and/or increased plantation profits if sold in the future. Noted in the book is what is characterized as the "third flesh," the master who sometimes took it upon himself to provide that increase, which black male spouses were powerless to prevent.

Complicating the situation for children was not only having half siblings and being caught in parental custody battles but their status as enslaved or free, particularly after emancipation in terms of inheriting property following the death of a property owning parent.

Even without legal standing, black relationships suffered from the usual list of problems such as abandonment, desertion, adultery, alienation of affection, and lack of support. Intimate relations were sometimes ended at one point yet resumed at a later time or not at all if one party took up with someone else.

Following emancipation, marriage was encouraged, and sometimes required by both society and the government, and desirable for blacks as a means of expressing their worthiness of citizenship and being considered fully equal in spite of their previous status.

Consequently, the real problems came to the fore when courts were forced to decide which and whether antebellum unions and resulting offspring should be recognized as legitimate. In other words, who was really married to whom?

Needless to say, blacks complicated the situation themselves due to their previous understanding of their status and the lack of civil rights under law. Indeed, many times their own personal feelings and attitudes were the overriding principle that governed their actions in relationships.

Even after emancipation, white society continued to scrutinize and even interfere in black intimate relations, from questioning a man's ability to work and support his family to the virtue of black women and their eligibility to receive pensions from the Federal government as widows of Civil War veterans

As one can see, the legacy of slavery was a gross miscarriage of justice and humanity, just a lead-in to myriad problems in the African American community heading into the 20th century, compounded then by the racism and oppression of Jim Crow.

There is much more here than a review can cover. Although there is little to nothing to criticize, be forewarned. This is an extensively researched book and it has resulted in a scholarly or academic missive, something that can be expected of a university press. It should not necessarily be considered as pleasure or light reading as it provides an exhaustive, in-depth look at the problems in black marriage of 150 years ago.

Although there is no actual bibliography, it is possible to see from the notes the sources used to craft this unfortunate and tragic tale in the history of the United States. With many contemporary photographs and illustrations, charts, graphs, and tables complementing the sources, this should be author. Hunter's magnum opus, serving to reinforce her standing in the departments of History and African American Studies.

One should read this book for its informative insights. This is a topic that needed to be publicized. Hopefully it will be referenced for many years to come.