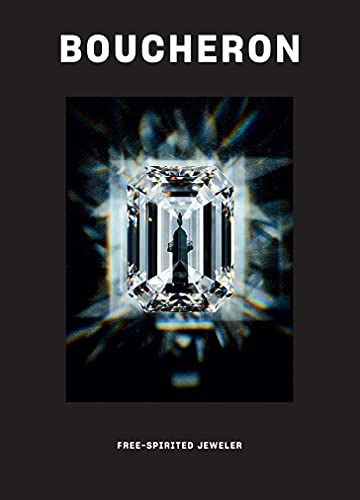 Boucheron: Free-Spirited Jeweler goes beyond the usual type of book that inhabits the genre. Anita Coppet takes the reader on a journey, an evolution, a behind the scenes look into a family history of one of the most storied and glorious heritage brands of haute joallerie. From the mid-19th century continuing on through today, the reader is afforded not only excruciatingly exquisite jewelry photos but also all of the steps that go into its creation.

This generational journey is well written and not overly factual, but it more than makes the point as to how Maison Boucheron has endured for over a century and a half. While Boucheron may not be as well-known as Cartier, Tiffany, and Van Cleef, Boucheron proffers so much more than just jewelry to wear. The maison produced an endless array of personal items which ranged from a hair pin to a lipstick tube, a tie pin to an evening purse to a tiara and everything in between—all in gold and mostly gem studded.

“Their story has been written by four generations and can be captured in one phrase: ‘to ensure the continuity of the family business.’ From father to son—each a man of his time—the Boucherons have all endeavored to add a little beauty to the world around them—one of the virtues of high jewelry.”

This reader found the way in which the product was shown to be far more decipherable than many other titles of this genre. While Boucheron: Free-Spirited Jeweler contains its fair share of jewelry drama, it also possesses the possibility to educate both the informed and uninformed reader. Hidden among the pages are facts and items that one never knew existed and are trademark looks and pieces of the maison, i.e. the question mark necklace and the maison’s predilection for using quartz, rock crystal, and a variety of other materials not usually found at this level of jewelry.

“Creative genius is hard to pin down in high jewelry as in other areas. One thing is certain, however, it rarely appears solely at a work desk. It is a cocktail of ideas that come together, a chaotic combination of emotions, music and images or simply the luminosity of the sky at a certain moment of the day—a vast puzzle that often falls into place as a design progresses.”

The prospective reader will be interested in everything from gemstones to design, ateliers, process, the finished product, and even the décor of the salons. The take away is that the reader will have greater understanding that a heritage brand such as Boucheron is not resting on its laurels but is in constant flux to create new designs that are steeped in the tradition of the brand. It’s a fascinating journey.