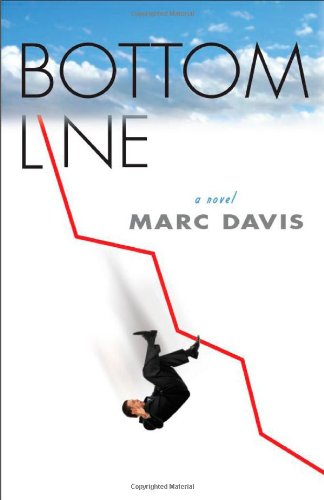 Can the publishing industry please, please declare a moratorium on financial thrillers written by business journalists or ex-Wall Street insiders in which the hero (never heroine) is a young and physically fit superstar, bootstrapped up from a hardscrabble background, luxuriating in five-star hotels and private jets, jaded but nevertheless feeling more twinges of conscience than his colleagues, who reaches a moral and career epiphany at the end?

The newest entry into this clichéd genre is Bottom Line by the former newspaper reporter and former commodities broker Marc Davis. (A two-fer!)

This novel’s hero, Nick Blake, is a senior partner and heir apparent at the prestigious Chicago-based management consulting firm Martell and Company.

As the book opens, in March 2001, Martell has been losing millions of dollars’ worth of clients, in part because of the lingering effects of the prior year’s dotcom collapse.

Suspicion falls on Nick when his girlfriend, the “dogged” and beautiful business journalist Rita Fitzpatrick, publishes this dirty laundry in her column in the local newspaper, the Examiner.

But before his coworkers can get too angry at Nick, worse dominoes fall: Adrian Martell, the firm’s ultra-competitive founder and Nick’s mentor, is indicted for insider trading; the senior partners’ $100 million slush fund is wiped out; Adrian flees; and the FBI descends on the company.

There’s no denying that Bottom Line is a solid page turner starting about one-third of the way in. Author Davis also deserves credit for not drowning his story in the usual mélange of drugs, booze, sex, luxury cars, drugs, designer clothing, and more drugs.

Indeed, he seems far more obsessed with takeout Kung Pao chicken, a turkey-pastrami sandwich on a croissant, chiles rellenos with rice and refried beans, and various other, lovingly savored food.

The big problem is that the plot relies on foundations too jerry rigged to stand solidly. Supposedly smart characters seem unbelievably clueless at key points. In other cases, the basic relationships themselves are implausible.

This lack of credibility starts in the very opening scene, where Nick—ostensibly a pro at reading corporate behavior—seems to assume that the top brass of Big Retailer Inc. had no idea that their company faces “significant functional problems” and a tumbling stock price until he told them.

Um, wouldn’t even the most stupid executives have noticed such major developments already?

Since Nick is dating a business journalist, would he and she really be surprised that his colleagues suspect him of leaking the inside dope for her column? Would Rita really not figure that revealing that his father was a convicted embezzler would embarrass Nick? For that matter, if she’s so ethical, wouldn’t she have told her editor from the start that was Nick’s girlfriend and thus shouldn’t write any stories about his company?

Nor does the book lay any groundwork for explaining why Nick had so much faith in Adrian. It’s obvious from Adrian’s first appearance that he’s a hard-driving SOB unconstrained by moral boundaries. If Nick is as ethical and smart as he’s made out to be, he would have quickly intuited this.

Bottom Line also features one of the most poorly written sex scenes in recent fiction. Nick and Rita’s lovemaking “was glorious, musical, a Bach fugue, a madrigal, the allegro movement of Beethoven’s Fifth.”

No doubt some financial thriller authors see themselves as the John le Carré or Raymond Chandler of the genre, as someone whose books will break out of their pigeonhole, get lauded as genuine literature. It would be wonderful if this were to occur someday.

Bottom line: These particular wannabes need to remember that the only way to avoid being perceived as formulaic is, in fact, to reinvent the formula.