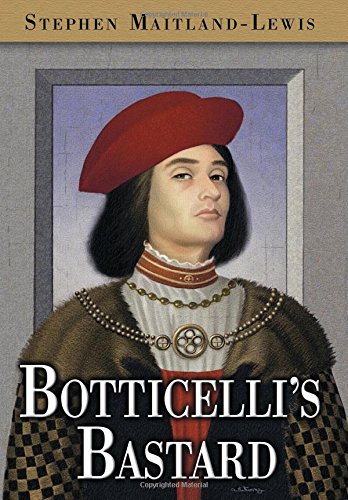 “Botticelli’s Bastard is a delightful story, a fantasy revealing the extremes of human nature as well as the depths of emotion possession of a work of art may evoke.”

Renowned art restorer Giovanni Fabrizzi is a lonely, unhappy man. His son lives in Florence, his father and wife recently died, and he’s remarried to Arabella, a much younger woman impatiently waiting for him to survive his grief—which doesn’t seem to be happening. At last, the current Mrs. Fabrizzi’s tolerance wears thin.

“I don’t want to go on like this.” She made an effort to contain her aggravation. . . . “You’re either married to me or to your memories, Gio. Not both.”

Giovanni’s reaction to that ultimatum is to bury himself in his work. In his studio, there are crates of art from his father’s home he hasn’t been able to bring himself to open. Now, Giovanni selects one.

Giovanni reached into the crate and slid the painting out, then removed the wrapping to discover a panel rather than a canvas. . . . He judged the style to be Italian but it lacked an artist’s signature . . . Giovanni set the portrait atop one of the crates and stepped back. . . .

There’s much more to this painting than meets the eye, however, for the painting of the Count, as Giovanni will come to call the subject, speaks to him.

Speaking Italian, an unseen voice said, “Get me out of this room. Please. I need light and air . . .” Giovanni scanned the room, then looked over his shoulder . . . Nothing had changed and no one was present. He stepped closer to the portrait of the nobleman.

“This must be a dream,” Giovanni mumbled to himself.

“A nightmare, I would say,” the voice uttered. “You try living in that wretched crate for decades.”

“Yes, of course. You’ve never spoken with a painted image before. There’s always a first time. Let’s get past all that.”

Once Giovanni convinces himself he isn’t going mad, he and the Count converse. He’s even persuaded to give a dinner party in his studio so the Count can bring himself into the modern world by observing his guests. Things don’t turn out as planned.

The Count explained calmly, “If your wife . . . invites an attractive young man to your dinner party. . .”

“What are you suggesting?’

“Are you so naïve?” the Count asked. “Have men become absurdly ignorant in the last few centuries?”

“I won’t stand here and be insulted. Not by an inanimate object. . . . Stop avoiding the question.”

“Your wife is having an affair with her young French friend.”

When confronted, Arabella admits her affair. Now the stricken husband turns again to the painting for solace. The Count attempts to distract him.

“As sad as you may be about your wife, I urge you to be happy with what you have. The suffering of others has exceeded yours, I assure you.”

He proceeds to tell Giovanni the odyssey of his portrait as it passes from one owner to another. Immersed in the story of the Count’s journey from Renaissance Florence to a crate in his studio, Giovanni soon realizes there is only one thing he can do. He has to authenticate the Count’s story in order to prove his own sanity, as well as the fact that the portrait is in actuality an unsigned Botticelli, and find its true owner.

“Count, I am going to do some research on you. In France and in Germany.”

“What about my laboratory authentication as a work of Botticelli?”

“I’ll get to that as soon as I come back,” Giovanni said.

Giovanni’s investigations will take him to Paris, Berlin, and New York City. He reluctantly reveals his story to his estranged wife and his son, and never really knows whether they believe him or are humoring him.

He soon finds himself not only seeking information on the painting, but also on a journey of self-discovery as family secrets prove a tragic connection to the portrait he would prefer denying. In the course of his travels, the Count becomes a friend and confidante, inanimate, perhaps, but giving advice which Giovanni has enough wisdom to accept.

This is the story of one man’s struggle to restore a stolen painting to its owner as he fights to reestablish a relationship with his family. What he finds along the way will make him question his own sanity as he faces the outrageous twists and turns of coincidence.

Botticelli’s Bastard is a delightful story, a fantasy revealing the extremes of human nature as well as the depths of emotion possession of a work of art may evoke. Stephen Maitland-Lewis is an award-winning author, and this novel supports those accolades.