Both Flesh and Not: Essays 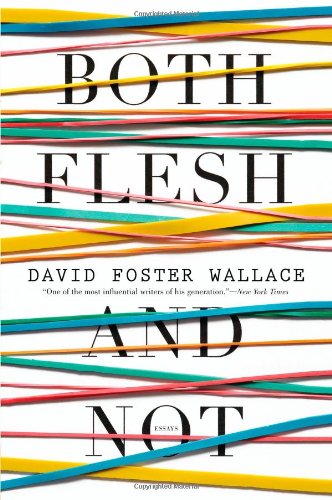 Both Flesh and Not is a never before published collection of David Foster Wallace’s nonfiction essays.

Readers of this collection will find a unique combination of intelligence, subversive humor, seriousness and playfulness, a love of words and a love of tennis. There’s also an undercurrent of edginess, of addiction and obsession. And there’s his signature trope: footnotes.

DFW’s essay “Federer Both Flesh and Not,” first published in 2006 is about tennis. As admirers know, DFW was a junior ranked tennis player, so this essay has an “insider” feel. But even if you don’t care about tennis, the writing is so beautiful, personal, and alive, so in the moment—even though the author is writing about a tennis match he is watching from his TV, it feels as if you were right there on the bleachers with your own personal tennis pro whispering in your ear.

This essay contains many examples of note-perfect writing, and this reviewer feels himself becoming a better writer by copying out David Foster Wallace’s sentences. “Beauty is not the goal of competitive sports, but high-level sports are a prime venue for the expression of human beauty. The relation is that of courage to war.”

Further in, we learn the coin toss for Federer’s first serve was made by a child cancer survivor. After the toss, here’s DFW’s take on the crowd, “It’s like once the ritual is over, the reality of why this child was part of it sinks in. There’s a feeling of something important, something both uncomfortable and not, about a child with cancer tossing this dream-final’s coin.”

And here’s what DFW has to say about Roger Federer: “Federer’s forehand is a great liquid whip, his backhand a one-hander that he can drive flat, load with topspin, or slice—the slice with such snap that the ball turns shapes in the air and skids on the grass to maybe ankle height.”

And here’s his comparison of being at the game versus watching on TV, “If you’ve watched tennis only on television, you simply have no idea how hard these pros are hitting the ball, how fast the ball is moving, how little time the players have to get to it, and how quickly they’re able to move and rotate and strain and recover. And none are faster, or more deceptively effortless about it, than Roger Federer.”

This essay also contains DFW’s trademarked flourishes: footnotes and asterisks, and asterisks on footnotes. In the last footnote of the essay we find, “But the truth is that whatever deity, entity, energy or random genetic flux produces sick children also produced Roger Federer, and just look at him down there. Look at that.”

In “Fictional Futures and the Conspicuously Young,” DFW gives the reader his take on the Gen-X authors Brett Easton Ellis and Jay McInerney, both of whom he criticizes as whiners. That criticism might be nothing new but the essay, first published in 1988, is really about trash culture, trash fiction, trash TV, and the state of graduate education in literature.

“Fictional Futures and the Conspicuously Young” is marvelously shaggy, rambling across late 80s American culture, also touching on the schism between older critics and the younger writers, and the harm done by academic graduate fiction courses and creative writing workshops. DFW recognizes on the other hand that so much bad writing allows good writers to stand out. “At least that means the good stuff can’t help but rise.”

With hindsight, a studier of culture might recognize that every generation (without thinking too much about it) reinvents culture in its own image, and so reinvents its own trash culture.

Given the distance of time and DFW’s stance as guardian against the barbarians at the gate, parts of this essay are way overblown though impressively so. “Trash is simply unreal, empty—and that (aided by more of and by TV) it seduces the market writers need and the culture that needs writers away from what is real, full, meaningful.”

This essay also outlines, highlights, and puts on a pedestal DFW’s genius and his obsessions. A reader might question whether DFW’s word-driven excesses are intentional or not, or might imagine the arguments DFW had with his editors over making the essay more palatable to readers. The essay contains a multiplicity of ideas and connections coming from a marvelous, extremely organized mind but evidently one that does not know, or will not admit when enough is enough, to the point that arguments become both circular and tedious. The horse has been flogged to death then filleted, fricasseed, flambéed, reduced to char and then flogged again, just to make sure the reader gets the point.

What so irritates DFW is all but ignored today.

For example, DFW criticizes “The Mary Tyler Moore Show,” something considered today part of that generation’s “golden age” of TV. What would DFW say about reality TV—shows needing no writers at all? Its so much worse that that. Today American culture revels in and celebrates trash TV. We are all barbarians.

“The Empty Plenum” is a review of Wittgenstein’s Mistress by David Markson, which goes on to my “to read” list.

The collection Both Flesh and Not provides the reader a second essay on tennis. In “Democracy and Commerce at the U.S. Open,” DFW attends and writes observations from the stands of the 1995 U.S. Open. As can be surmised from the title, almost every observation includes a sponsoring brand, among them: Evian, Fila, L. L. Bean. IBM, Virginia Slims, Chase, and Infinity. DFW notes that 50% of the tickets were pre-sold to corporations, and the sponsors are listed in a footnote along with the price of food and souvenirs including, soda, hotdogs, popcorn, Haagen-Dazs ice cream, beer, t-shirts, and visors.

DFW also observes and comments on ushers, guests, and New York City. His observations are not just meticulous and insightful, but also engaging and warm. He’s having fun as a guest at an outdoor arena watching a sport he loves. As with the previous essay on tennis, exceptional and quotable writing can be found throughout. He describes Pete Sampras as, ”One big length of muscle, a kind of angry eel getting ready to writhe.”

“The (As It Were) Seminal Importance of Terminator 2,” is a movie review with many snarky digressions. The observations and the writing (including yes, footnotes) are as per the usual, not to be missed.

“The Nature of the Fun” provides the reader observations on the psyche of the writer. Anyone who takes the craft of writing seriously will see him or herself here.

“Rhetoric and the Math Melodrama” is about geek-chic in movies and books. Readers of DFW will note his affinity for philosophy, mathematics, and science. His take on the scientist-hero is an allegorical template, the classically tragic Prometheus or Icarus-type whose high-altitude genius is also his hubris and fatal flaw. (DFW is not the only writer with a cult following with this penchant. Thomas Pynchon is one who comes to mind.)

What is missing though, at least in the preprint sent to me, is any sort of context for the review: What particular surreal itch was he trying to virtually scratch?

There’s an essay on word usage, “Twenty-Four Word Notes.” The essay starts out workaday with observations on comma usage, who versus whom, and that versus which, etc. But not really etc. because the author is DFW. The essay devolves into the obsessional.

A reader will find three pages (three pages!), of synonyms and definitions on hair (on hair?!) that DFW credits to having a close-by copy of the OED to help. (This reviewer is reminded of Pnin in Nabokov’s Pale Fire and the odd comfort that reality is perhaps stranger than fiction).

“Borges on the Couch” is a review of Borges: A Life by Edwin Williamson, a book DFW does not like because of the pop-psychologizing done by the biographer, “. . . the person we encounter in the literary biography could not possibly have written the works we admire.” The review soon becomes DFW’s own pop-psychologizing of Borges. Hmm.

“Deciderization 2007—A Special Report” is DFW’s foreword to The Best American Essays 2007. This essay is a reflection of what it means to pick and choose that turns into an analysis of personal taste, bias, pop culture and then out of nowhere an attack on President George W. Bush. Are we witnessing the political awakening of DFW? Perhaps, as DFW’s political awareness continues into the last essay, “Just Asking,” and one wonders, what if . . . ?