The Boston Girl: A Novel 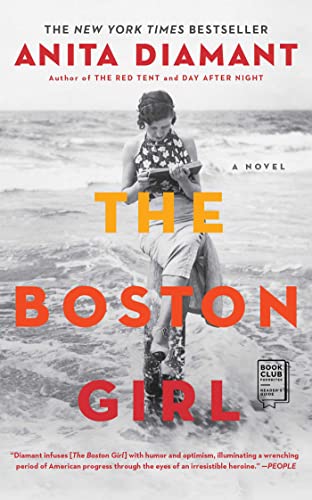 “Despite its artistic and literary weaknesses, The Boston Girl is interesting, informative, and a good read.”

The Boston Girl opens with an explanation or excuse for its 85-five-year old narrator Addie Baum to relate the story of her life. Addie’s granddaughter Ava asks her to talk about, “how I got to be the woman I am today.” Born in Boston in 1900 to recent Jewish Russian immigrants, Addie, in colorful detail, conveys her experiences as the daughter of poor, Jewish immigrants to America including her happy marriage to a lawyer, her education, and career as a social worker and teacher.

For instance, among her experiences, Addie recounts how some of her relatives succumbed to influenza; how a close friend of hers almost died from an illegal abortion; the experience of working in a shirtwaist factory; and the struggle to get an education as a poor immigrant girl.

Anita Diamant does a nice job of illustrating how the struggles and tensions that poverty, lack of education, and cultural differences of new immigrants affect marriages, families, and communities. For example, Addie’s mother blames most of her troubles on living in the United States, despite the fact that life in Russia for her and her family was intolerable. She forbids Addie to advance in her education and live on her own even when she is an unmarried adult. When Addie moves into a respectable boarding house with mostly other Jewish women, her mother “gave me a look like I was a worm. ‘I should be glad you’re going to a Jewish whorehouse?’” she yells at Addie.

For the most part, The Boston Girl is well researched and informative; however, in one section, when describing the impact of WWI, Addie writes, “We moved in 1918, right in the middle of the war.” The war ended in 1918, so it was almost over. Soon after she says of the flu that it was “Nearly always fatal.” While the flu pandemic was terrible, it was not always fatal. Diamant may be trying to capture the casual, colloquial, even hyperbolic voice of Addie the narrator, but her dates and other basic historical facts should be accurate.

While The Boston Girl is clear, organized chronologically, and generally engaging, it is not a literary masterpiece. The trope and structure of a grandmother recounting her life story to her granddaughter is hackneyed and conventional. Also Addie sounds like a stereotype of a Jewish grandmother. Diamant fails to create Addie’s voice or a distinct persona that differentiates her from numerous other Jewish grandmothers.

Addie concludes the main part of her narrative: “Your grandfather was a peach. If he’d been at my birthday party, he would have made a speech so schmaltzy that there wouldn’t have been a dry eye in the house. It’s a shame he wasn’t there, but it’s worse that he missed being at your sister’s wedding and at your graduation from Radcliffe.” She sounds like a parody of my grandmothers and so many others.

Although Addie is the child of immigrants, she is well read and educated. Despite her education and the fact that she’s narrating a well-developed, cogent, intelligent story, her language is rife with clichés and hackneyed phrases. Some of the chapter headings are cringe-worthy such as “It Was Like Waking Up from a Bad Dream.” There are also numerous examples of mixed metaphors and piles of clichés. She describes her friend Gussie: “That was Gussie in a nutshell: full of herself and ready to give you the shirt off her back.” Later she says of her friend Irene’s parenting style: “There was no baby talk and no beating around the bush in her house. Irene always told the truth and called a spade a spade. . . .”

Despite its artistic and literary weaknesses, The Boston Girl is interesting, informative, and a good read. It seems more like a Young Adult novel than literary fiction and would be an ideal book to read in a middle school English class in conjunction with a history unit on immigration or early 20th century America.