Born Under a Lucky Moon 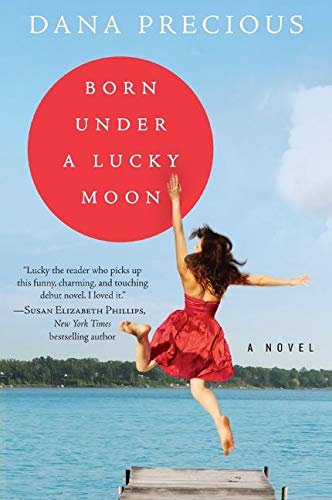 The structure of Born Under a Lucky Moon is determined by Jeannie Thompson, the heroine, who goes back and forth relating the events of her life during two years, 1986 and 2006, and gives no account of the years in between. The 1986 setting is a rural area in Michigan, and the 2006 setting is in California. Thus, the things that happen to Jeannie derive from two very different places.

Although author Precious appears to depend upon the differences between these settings to supply depth to her book, heroine Jeannie reacts simply and predictably in both. Her reactions are static, a nearly stoic devotion to her very peculiar family. Although she is, according to the text, an intelligent and educated woman, her odd devotion prevents her from making simple decisions until the very end of the book. Readers will no doubt be frustrated through many episodes, involving all sorts of possibly comic material, fire engines, ambulances, naked grandmothers, food hoarding, marriages of convenience, a lecherous preacher, and such—all without truly being funny. Born Under a Lucky Moon has multiple effects, but without enough, if any, causes.

Jeannie endures the peculiarity of her family members, like hiding food around the house and worse, even when she feels their very oddness scares suitors to flee. The hope that Jeannie’s struggle between her unconditional love of her eccentric family and feelings for Aidan, her uncomplaining patient lover, is never truly understood by the reader. Since Jeannie is a supposedly a mature woman and executive of a major film studio, the reader feels no empathy when Jeannie keeps bonds with her weird family.

The eccentricities of the weird family need to be explained because they seem simply cardboard caricatures. Jeannie’s Pollyanna-ish mother lives in a world of her own while sometimes watching the misadventures of her children and, at other times ignoring them. Her superficial parenting is meaningless, like a giving restless kids in church a pinch on the knee, hanging posters of hackneyed aphorisms on the household walls, and mindlessly repeating, “Kiss and make up,” during heated discussions. Jeannie’s father is loving, but ineffectual, only a shadow. Her siblings act in inexplicable ways, and their motives, if explored at all, don’t make much sense.

A major fault with Born Under A Lucky Moon is that the actions of many of the characters don’t make sense. Perhaps a deeper development of major characters would have prevented this; however, most of the characters seem to be shallow people. In the present world of independent women, Jennie’s devotion to this cast of characters is hard to understand.

While Precious works to establish the theme of marriage (two weddings in one weekend and a failed marriage), Jeannie’s first marriage seems predictable from early differences in courtship and not truly relevant to the plot. Her relationship with her lover, Aidan, ends as it only could in a typical romance novel. Readers will most probably wonder what he sees in this immature woman.

Could at be that the author, herself, senses the need for real drama—a sense of balance between time, hope, fear, and a raising of stakes? A murder is thrown in near the novel’s end, but the victim is a fringe character, and the murderer is new to readers—who will hardly care.

Perhaps what Born Under a Lucky Moon truly needs is a classic love triangle affair—not two plus a crazed family. The novel is one that a devotee of romance novels might pick up to read while flying across country. But she needn’t worry about shedding tears or sighing dramatically in public—or accidentally leaving the book on her seat in the plane.