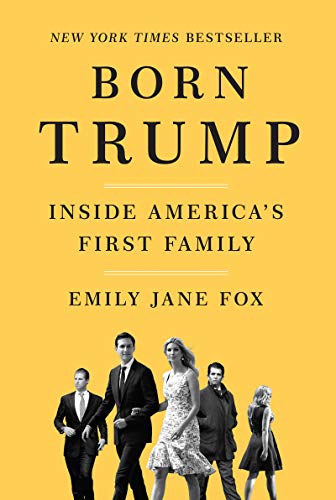 What can we learn about the current president of the United States from his children?

Donald J. Trump wanted five children so that at least one would be like him. This book analyzes Trump’s relationship with the three wives who bore him children and details how the four eldest children grew up and how they conduct their grown-up lives.

The book’s early chapters tell how Trump married Ivana, then dumped Ivana for Marla, and—in tandem with other affairs—replaced Marla with Melania. The Donald’s penchant for double-dealing, his zest for publicity, and his frequent cruelty were manifest throughout these transitions. His children saw much of this and, at times, these events them despise their own father.

Fox makes psychological sense of the facts she unveils: Both Ivanka and Jared “fell victim to their father’s bad, selfish behaviors. Donald publicly cheated on Ivanka’s mother and, in the aftermath, played their divorce out in the press. Jared’s father, Charles Kushner, was convicted of eighteen counts of tax evasion, witness tampering, and illegal campaign donations and was sentenced to two years in prison when Jared was twenty-four.”

Both Ivana’s daughter Ivanka and her husband Jared chose to pick up the pieces and cover for their fathers. Ivanka tried to defend the Donald even as he publicly fantasized about her and after the Access Hollywood tape came out. Once, when Trump started dating Melania, later to become his third wife, she returned to their apartment to find a mess of twisted sheets in the bedroom and towels smeared with makeup—the detritus of Donald’s very recent frolic with a young model. Donald told Melania the makeup was Ivanka’s after a modeling shot—just ask her.

Fox says that both Ivanka and Jared “know the truth about their fathers—a blowhard philanderer on one side and a brutalizing convicted felon on the other—and have spent their lives trying to prove themselves and pledge their loyalty to those fathers anyway.”

Where Donald and Jared differed was with the press. Donald relished seeing his face on the cover of magazines—even fake covers. Kushner, by contrast, sought to control the press rather than be covered by it. These diverse attitudes brought both men to the feet of Rupert Murdoch. Jared invited Rupert (50 years his senior) to dinner and told him, “I want to be you.” Murdoch and his third wife, Wendi, played cupid to Jared and Ivanka, and helped bring them together after a spat in 2008. Jared, in turn, helped reconcile Donald and Rupert after the latter’s New York Post and Wall Street Journal printed negative stories about Trump’s campaign for president. Once the Donald became the Republican candidate, however, Jared persuaded his father-in-law and Murdoch to mend fences. The Murdoch-owned Fox News mostly spared candidate Trump. Soon Trump had Rupert’s fourth wife beside him in the front of a golf cart in Scotland with Rupert in the back seat.

To get a sense of the drive built into the Kushner family, one should know that Jared’s grandmother Rae managed to escape the Holocaust by joining a group of Jews who tunneled from Novogrudok (now in Belarus) to a farm house in the woods, where she met the man who became her husband. After the war they got to Italy and then to New York in 1949.

There Rae gave birth to Charles and Murray (something like Cain and Abel) and two sisters. Charlie created a real estate empire but fell out with Murray and wound up in jail after multiple dirty tricks against many persons. Fresh out of grad school, Jared took over the empire but flew to the Federal Prison in Montgomery, Alabama, every Sunday to consult and be with his father, who rejoined the business in 2006. The Kushner family admitted Ivanka into their circle after she converted to Orthodox Judaism. A perfectionist, she studied the requisite texts.

Fox knows enough about the family to detail son Eric as “Voltron Number Three” and half-sister Tiffany as “The Voltron from Another Universe.” Fox describes Eric’s mental state as he became a victim of his parents’ public rift. One day the six-year old Eric refused to pick up his exercise mat and, when coaxed to do so, called his teenage dance teacher a “bitch.” Like Don Jr. and Ivanka, he was eventually “counseled out” of his elite private school.

But Eric’s brother, six years older, and sister Ivanka, two years older, formed a “distinct Trump team” to look after Eric—“their own little unit, a constant for one another when everything else had turned upside down.” Though all the Trumps seemed to become no-holds-barred negotiators in business, en famille they usually were empathetic and helpful to each other.

Eric later told The New York Times “My father, I love and appreciate, but he always worked 24 hours a day.” The “Voltron from Another Universe,” Tiffany, lived with her mother in California most of the time until 2012, when she started classes at Penn. She seldom saw her father but he did regularly praise her for getting good report cards.

Fox does not strive to explain politics or policies, but she does provide deep insight into the personal factors that shape the Trump White House. Fox gives no sources for any of her putative facts, but—a staff writer for Vanity Fair, she bases her narratives apparently on hundreds of interviews and a wide reading of  gossip columns in periodicals far and wide. Unfortunately, however, her book has no hint of a bibliography or an index.