Born to Be Wilde: The Wildes of Lindow Castle 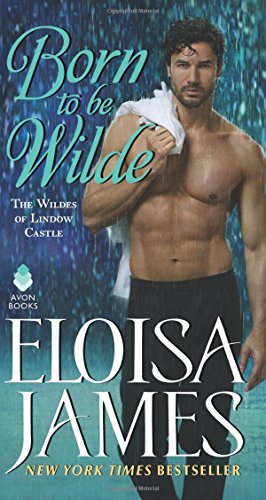 “an entertaining and welcome entry in this series”

Parth Sterling may not be a Wilde by blood but he’s lived with the Wildes of Lindow Castle since the age of five when his parents died, so he’s at least a Wilde in spirit. Parth isn’t considered a “gentleman,” however, because he’s a banker and a businessman, but everything he touches turns to gold, and that’s made him one of the richest men in England. There’s no problem he can’t solve, at least the Wildes think so. For a half-Indian orphan, that’s not too bad.

Presently, Parth’s faced with a problem he thought would be simple, but it’s turning into a twisted mess.

All the Wildes, with the exception of Alaric and his bride who are off exploring the world, are gathering for the wedding of North, the future duke, to Diana, when Parth is confronted by Lavinia Gray, Diana’s cousin. Lavinia has a problem but she is about to become Parth’s problem. Her mother has squandered Lavinia’s dowry and stolen Diana’s emeralds to pay for her drug habit. Lavinia believes the only thing she can do is marry someone with enough money to replace the stolen gems, thereby paying back Diana and keeping her mother from being arrested.

Parth rejects her. Politely, of course. He and Lavinia have never gotten along. She ridicules his aloofness and reserve, calling him names evoking laughter from others; he thinks she’s a shallow spendthrift who lives only for new dresses and hats and will bankrupt any man she marries.

“The man who succumbed to a woman like that would find himself with a wife who had no thought in her mind but reckless expenditures on ribbons and lace. Desire would inevitably wane and Lavinia’s husband would find himself listening to disquisitions about bonnets. Lectures about petticoats.”

To soften his refusal, he promises to help Lavinia find a husband, but abruptly, no one he selects seems worthy. Why does Lavinia Gray, the woman who’s vexed him so since their initial meeting at North’s betrothal party, suddenly seem so desirable?

“He tried to imagine feeling so passionate about a woman, and failed. Marriage was just another business transaction.”

The cool, reserved Parth is about to learn differently.

As with all the other novels in the series, this one abounds with characters from previous stories. The deceased Horatius is mentioned frequently, and the reader may find himself hoping that the author is continuing to set up a situation where the one Wilde son presumed dead will somehow be discovered not to be.

Author James’ wit is well in evidence in this novel, as is her depth of research in her knowledge of clothing, fabric, and fashion accoutrements of the era, as well as in the development of Parth’s half-Indian background. It’s only wished she had let Parth and Lavinia make that trip to India to seek out his Indian family—but that would be quite another story altogether, it would be imagined. Perhaps later . . .

A little more lively than Too Wilde to Wed, with more drama inserted through the problem of Lady Gray’s addiction, otherwise the theme is similar—bringing together two people who claim not to care for each other while the opposite is blatantly obvious—but Lavinia proves a much more enterprising young lady in that she seeks outside help in her endeavors to repay the money her mother has stolen.

Born to be Wilde is an entertaining and welcome entry in this series. Parth is as sexy, charming, and determined as any Wilde-born scion when it comes to getting the girl.