Born to Be Hanged: The Epic Story of the Gentlemen Pirates Who Raided the South Seas, Rescued a Princess, and Stole a Fortune 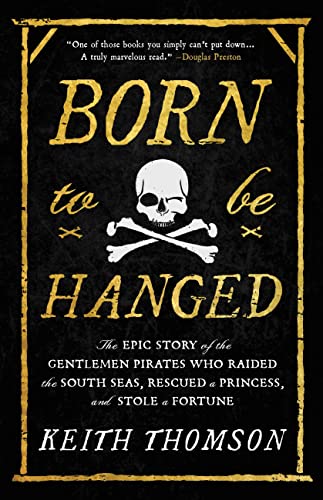 “The story is filled with tension, conflict, and explicit details to make it an enjoyable as well as educational read.”

Keith Thomson, in his new book Born to be Hanged, brings 17th century pirating to a new level. His attention centers primarily on a group of seaworthy English pirates whose raids in the South Seas covered a litany of activities from rescuing a native princess to hijacking Spanish ships and attacking Spanish forts and towns from Panama to the Isla Duque de York.

The book opens with an excellent history of pirating in the late 1600s and explains that the various concepts of the swashbuckling pirate that are seen in today’s literature are not quite the reality of such men.

Thomson focuses on one particular set of pirates whose journals set the tone for the history of their many events. This list includes Basil Ringrose, a “first-time buccaneer and gifted mathematician and navigator”; Lionel Wafer, “a buccaneer surgeon”; Bartholomew Sharp, a buccaneer captain; William Dampier, “a world-class naturalist”; New Englander John Cox; Edward Povey, “an Englishman whose writing skills, though wanting, would be enough to save him from the gallows”; and William Dick, “the seventh of the expedition’s seven chroniclers.”

Thomson includes in his list of seafaring buccaneers Captain Richard Sawkins, “famous . . . as much for his plunder of the Spanish as for his narrow escapes from the English”; Captain Peter Harris “and the fleet’s admiral, John Coxon; and Captain Edmond Cooke as leaders of the expedition.”

Each of these men felt the draw—the excitement—of sea voyages, not to mention the opportunity to line their pockets with whatever bounty they could find. And the pirating community had its fingers in multiple places where those bounties were ripe for the pickings.

The story starts with an Indian princess. Her name is unknown, but she was kidnapped by Spanish soldiers and her grandfather, a Kuna Indian leader shares his desire to rescue her with the buccaneers. He appeals to the English pirates for their assistance and in return will help them navigate through the Isthmus of Panama, specifically the Darien Province, to the South Seas, where Spanish soldiers hold many islands and cities along with gold and silver treasure. What more could a pirate ask for?

Thomson goes into some detail about this excursion and the rescue of the princess, although there seems to be some question as to whether she really wanted to be rescued! It should be noted that Thomson takes the information gleaned from many of the pirates’ journals and sets the tone with vivid descriptions of islands riddled with snakes and lizards, towns where Spanish garrisons have established strong communities, and the perils of treks across land from one sea to another with little in the way of supplies.

The story is riddled from beginning to end with the tensions experienced by the pirates as they pursue their major goals—treasures and expunging the Spaniards from their forts and their ships. So much of the story is gained from the pirates’ journals, that the scale is tipped, for the most part, in favor of the pirates and to the detriment of the Spanish. Regardless of each excursion’s success or failure, it’s a rousing tale from beginning to end.

Thomson details the democracy of the pirate’s life where decisions are not always made by the captain in command, but rather by the majority vote of the pirates themselves. As one would expect of a story chronicling pirates there are several mutinies. At one point, there is disagreement between two sides and the losing side is set afloat to fend for themselves. It is not unusual to read about captains being clapped in irons while the crew identifies a new captain to continue the excursion.

As Thomson details the various excursions and encounters with the hated Spanish, he adds a great deal of visual reality to the battles, especially when describing the ship’s doctor’s tools and operations that frequently resulted in the loss of limbs.

Thomson has included at the front of the book a map of the Isthmus of Panama, the South Seas from the northern most part of South America, to the Drake Passage and the Straights of Magellan that eventually bring the pirates back to the Atlantic Ocean and the Caribbean Sea, and on to England.

As the journey comes to an end and the surviving buccaneers find themselves back in England facing charges for pirating, there is a sense that the excitement of the first three-quarters of the book has lagged somewhat. That should not, however, deter the reader. The story is filled with tension, conflict, and explicit details to make it an enjoyable as well as educational read.