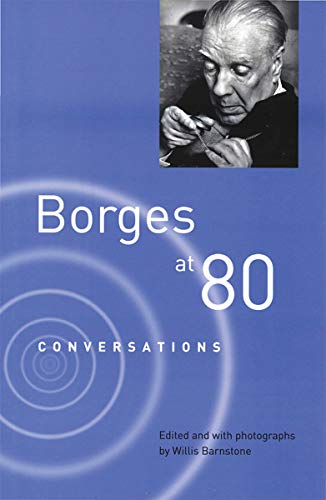 Jorge Luis Borges is considered the patron saint of computer programmers for his mastership of infinity and self-reflection, and Borges at 80 is a reprint of the same title published by the University of Indiana Press in 1982.

Borges at 80 is organized into 11 chapters, each a different conversation or interview dating between 1976 and 1980. Willis Barnstone is an interviewer for many of the conversations and provides the afterword.

A few of the conversations were public interviews, some were Patten lectures given at Indiana University, one was published in the Chicago Review, and one is a transcript of his appearance on “The Dick Cavett” TV show.

Photos accompanying the text show Borges to be well dressed and elegant, the conversations reveal him as sharp and an excellent interviewee. Borges is in turn charming, self-deprecating, humorous, and also serious. The best way to experience Borges is to share samples of his conversations. Note that with the right question and when the interviewer exhibits some restraint from interrupting, Borges is free to give longer, more complex opinions than what is sampled in this review.

Interviewer: When have you moments of fear?
JLB: I am feeling it now at this moment. I have stage fright.

Interviewer: Everyone sitting in the audience wants to know Jorge Luis Borges
JLB: I wish I did. I’m sick and tired of him.

In reflecting on the difference between his private and public persona, Borges points out a short prose piece he wrote on that subject, “Borges and I,” which a reader can find in its entirety on Google.

JLB: As to me, personally I have no ambition. I think that I am a mistake, that people have made too much of me.

JLB: I think of myself as not being a modern writer. I’m a nineteenth-century writer. I think of literature in terms of the nineteenth century and the early twentieth century.

JLB: The writers of today who interest me are chiefly dead writers. I’m an old man. I may be dead for all I know.

When asked about the mistakes he’s made, he says,” Yes, but what can I do about it? All those things, the wrong women, the wrong actions, the wrong circumstances, all those are tools to the poet.”

Borges’s daily life centers around being blind, and from a matter of practicality he was forced to move from writing short stories to poetry. His blindness is hereditary, something that happened gradually. He describes his blindness not as darkness but as a luminous mist. He does not read Braille but has someone read to him.

Interviewer: Do you still go to the movies?
JLB: Yes, but I can only hear the voices.

Borges’s earliest memories are of books and old Buenos Aires. He claims that although the present exists the past does not. The past is only memory, something dependent on trust, something that could be changed and no one would know.

Borges has frequent nightmares, which horrify him though he also relishes them. He sees his nightmares as proof of the existence of hell.

JLB: When I think of mortality, of death, I think of those things in a hopeful way, in an expectant way.

Interviewer: I would like to ask you about hell.
JLB: I know it only too well.

Borges lives for the next poem, the next story.

JLB: I think of writing poetry and reasoning as being essentially different. I should say there are two ways of thinking. One is the argument, the other is the myth.

He expresses deep feeling about poetry, pointing out that if you are an artist the aesthetics are personal, and recommends to the reader the mythology of Endymion and Latmos as compelling.

He sees poems as exercises in structure and form of logic versus words striving for elegance and completeness knowing perfection is unachievable but . . .

JLB: I think I can say that writing poetry or writing fables—it all boils down to the same thing—is a process beyond one’s will.

Borges refers to a poem of Rudyard Kipling that demands particular attention. He refers to the poem as “The Thing,” a phrase that appears in Kipling’s When Earth's Last Picture Is Painted in the third stanza. This poem also can be found in its entirety on Google.

One “conversation” is a festschrift—a celebration of his work and life in which students read his poetry and prose in Spanish followed their English translations. After each reading, Borges provides the history and meaning of each poem. Of a few he says there is no meaning; he encourages the reader to simply think of the “sound and symbols and that’s that.”

In writing he prefers English to Spanish, giving his reason as the limitations of the Spanish language, one such limitation he points out is Spanish has the same word for “sleep” and “dream.”

Borges does not reread his own writing after publication or even have his own books in his house. When he receives new translations of his work, he gives them to his postman as gifts. “When I write something it is because I have to. Then once it’s published I do my best very easily to forget it.”

Borges is a believer in the mystical experience; he refers to Coleridge, H. P. Lovecraft, and De Quincy, author of Confessions of an English Opium Eater. He has read the Tao Te Ching in various translations, the Kabbalah, and also the Gnostics.

JLB: I think of the world as a riddle and the beautiful thing about it is that it can’t be solved.

In the afterword, Willis Barnstone’s says of Borges’s impact: “Those who have heard him or read him remain affected for life.”