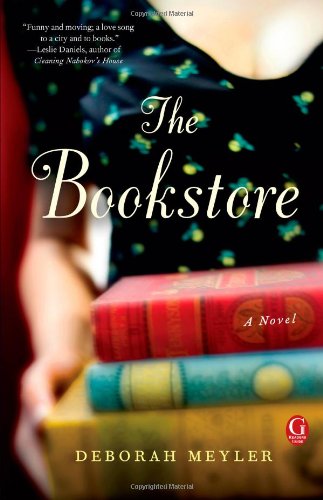 Edna Buchanan hit the nail on the head with this quote: “Friends are the family we choose for ourselves.” The heroine of Deobrah Meyler’s newest book, The Bookstore, would certainly agree.

Esme Garland thought her life was blessed: studying for her PhD at prestigious Columbia University, living in bustling New York City after the quiet of her British home, and in love with a wealthy older man.

Until it falls apart. Esme finds out she’s pregnant, her dream boyfriend dumps her, and she’s at a loss. Luckily for her, the owner of her favorite bookstore takes her under his wing. With a job for security, Esme begins to look toward her future, helped along by the unconventional wisdom of the heart family she builds from amongst the characters who run and frequent the shop.

The Bookstore tells a tale that’s not all that original: the Young, Spunky Heroine falls for the Wrong Guy (suitably telegraphed from the first time the reader meets him), he Does Her Wrong, and she Has to Survive. Throw in Characters, Wise Old Guy, and Brooding Loner Who Loves Her from Afar, and you have the plot of too many romantic comedies to count.

The difference in Ms. Meyler’s book is the wit and charm with which she tells us this tale we’ve heard before. Esme and company are sketched quickly, but with such definition that they don’t melt into a general soup of cliché. Her interactions with the customers in the shop are sometimes poignant, often funny, and generally believable.

Ms. Meyler has a sharp eye for setting, allowing the reader to see New York City as Esme does: first as a newbie and then as a resident. She walks a fine line between defining Esme’s world and advertising New York businesses—the name dropping could have easily become tiresome—but she’s successful in keeping the story paramount over distracting detail.

It’s fair to say that most of the “twists” in The Bookstore are not all that surprising, but that isn’t really the point. Ms. Meyler has created a fun, strong (ish) heroine, a cast of supporting characters that are funny and sympathetic (if a bit cliché), and a story that makes you feel good.

At the end of the day, The Bookstore is a charming, heartwarming affirmation of the family we build in our own hearts. Who can be against that?