The Book of Wrong Answers 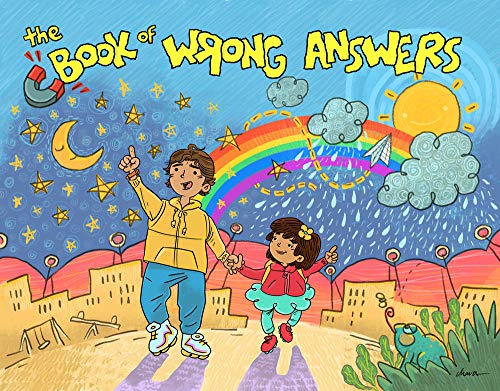 Just how do planes stay in the sky? How do people get inside the television? And why don’t the people on the bottom of the earth fall off? Don’t expect to find the answers here—at least not in the book itself. Spoiler alert: fortunately, in the last two pages, any misunderstandings are cleared up in a section titled “What Grownups Think.”

This romp through questions every child is curious about cleverly twists the answers into what a child might imagine. It turns out that planes stay in the air because “they get really light. It’s like a paper airplane flying in the sky.”

And then the next question, of course, is how do people fit inside those tiny airplanes? It turns out “the people get really little too.” And when those people (like Grandma) look out the window, they think “all the houses and people and cars down here are Little. That’s called the Theory of Relativity, when our relatives think we’re the ones getting small.”

Big brother Diego is the source of all the wisdom, such as it is. Little sister Gigi, like every child, has an endless list of questions. The two converse without the convenience of dialogue tags, but even early readers should be able to follow who is saying what by paying attention to the color of the font—maroon for Gigi and teal for Diego—as well as who is asking the questions and who is answering. At the very least, it’s a teachable moment for early readers or even pre-readers to discover how many clues a page of text and illustrations provides.

The simple illustrations in muted, mostly primary colors by Diego Chaves complement the simple text. While not wildly inventive, they do the job in a playful way.

Kids will get a kick out of Diego’s imaginative explanations and might even recognize an assumption or two of their own. To extend the fun, parents and teachers should invite kids to ask their own questions and create some fun wrong answers.